Bhubaneswar: The State Government, different agencies, departments and districts are well prepared to face the situation arising due to cyclone JAWAD which is likely to hit Odisha coast on December 4 morning, Special Relief Commissioner Pradeep Kumar Jena said on Thursday.

The IMD will give a clear picture on Friday about the position, path and movement of the cyclone, he said.

Addressing a press conference here, the SRC said, “The intensity, landfall and other critical aspects of the system will depend on the direction in which it recurves (from sea to land). However, we are in complete readiness, especially the 14 coastal districts have been placed on high alert.”

The coastal belt and adjoining districts will see rains from the midnight of December 3. The rainfall activity will intensify further as the cyclone moves closer to land on December 4. Ganjam, Gajapati, Jagatsinghpur and Puri are very likely to face the maximum impact of this cycline with heavy rains and strong winds, said Jena.

“All our fishermen except a few out in the Chilika lake are back on the shore. From December 3 to 5 the Fisheries Department will announce a ban on fishing in the Bay of Bengal,” he added. Since a no-moon period (Amavasya) falls on December 3 and 4, the storm surge is likely to be higher than it usually is, he added.

A total 225 teams of NDRF, ODRAF and Fire Service have already been deployed in the coastal districts, Khurda and Cuttack and 50 teams are on stand by while evacuation process from the coast, low lying areas and kutcha houses will begin from 3 December morning.

“The cyclone shelters on the Odisha coast are well equipped with food stock and other necessities. COVID guidelines will be duly adhered to at these shelters,” Jena added.

Engineering Departments and Electricity DISCOMS are ready with men and material to carry out repair and restoration activities post cyclone. The picture will be more clear by Friday, when the cyclone approaches closer to the coast. More mobilization of men and equipment will be done accordingly, the SRC said. 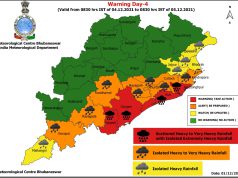 Tathya Correspondent - August 12, 2021 0
Bhubaneswar: Odisha State Pollution Control Board (OSPCB) has ranked Number One in Public Disclosure in the Country. With 67...