Bhubaneswar: While the Indian Meteorological Department (IMD) on Saturday forecast heavy to very heavy rainfall in several districts of Odisha over the next 24 hours as southwest monsoon advanced over the state, capital city area in Bhubaneswar and adjoining Cuttack experienced heavy downpour in the evening.

The monsoon, which entered the state on Thursday, covered Bhadrak, Balasore, Kendrapada, Jagatsinghpur, and remaining parts of Puri, most parts of Khordha and Nayagarh, and some parts of Cuttack, Jajpur and Mayurbhanj districts on Saturday, the Met centre said.

Conditions are favourable for further advancement of monsoon into remaining parts of Odisha during the next 24 hours, it said.

A low pressure area that lies over northwest Bay of Bengal is likely to become more marked and move west-northwestwards across Odisha, Jharkhand and north Chhattisgarh during the next two-three days, the Bhubaneswar Meteorological Centre said.

IMD forecasts light to moderate rainfall at many places over the districts of coastal Odisha on Sunday.

There is a likelihood of heavy to very heavy rainfall in many districts, including Cuttack, Sambalpur, Balasore, Malkangiri, Kalahandi, Bhadrakh and Kendrapara districts.

Keonjhargarh received 81 mm of rainfall, while Cuttack received 36 mm from 8.30 am till 5.30 pm on Saturday, it added. 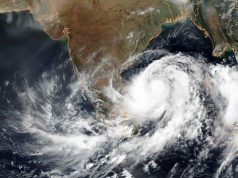