State Congress organized protest demanding the arrest of Minister Dibya Shankar Mishra for his alleged closeness with the prime accused in the Kalahandi teacher’s kidnap and murder.

Congress Working President Mr.Biswal thanked the people of Odisha for their “overwhelming” support to the ‘Hartal’

However Governing BJD dismissed Congress’ claim of it being a big success a ‘Joke’.

The state-wide ‘Hartal’, led by the Congress, began at 6 am and passed off peacefully without any untoward incident, police said.

The six-hour ‘Hartal’ evoked mixed response among the people with Congress activists picketing at several important junctions across the state.

Many Congress workers were seen requesting people to observe the ‘Hartal’ for the sake of security of women in the state. In Cuttack, some ‘Hartal’ supporters were seen offering chocolates to the people to solicit their support.

Markets and departmental stores were closed till 12 noon. Small shops remained open, while vehicles were fewer than usual on the roads. People also preferred to stay indoors due to the inclement weather.

Both State and Union Government as well as Corporate offices witnessed normal attendance.

The BJP, which has been accused of sponsoring the Congress-led ‘Hartal’, was too cautious over its reaction.

“The Kalahandi woman teacher’s killing has already become a mass movement in the state. Many parties and organizations are holding agitations, and Friday’s event was one among them,” BJP Spokesperson Golak Mohapatra said.

All non-BJD parties in the state supported the ‘Hartal’ though many did not publicly spoke in support of the Congress.

BJD Spokesperson Sasmit Patra said the “failure” of the ‘hartal’ showed how irrelevant the Congress has become in the state.

“They are not concerned about ensuring justice for the teacher’s family, but the leaders are only bothered about securing the state party president’s post by getting TV footage about their protests,” he claimed.

The opposition has been demanding the sacking of Mishra, accusing him of shielding the prime accused. The 24-year-old woman teacher’s body was exhumed from the compound of the school where she taught in Kalahandi on October 19.

The Congress had called a six-hour bandh across the state on Friday, but the Orissa High Court had ruled on Thursday that only a ‘Hartal’ could be held and not a general strike.

“We are holding the hartal peacefully as per the high court’s direction. The people of Odisha, particularly women, have now realised that Chief Minister Naveen Patnaik has been shielding the Minister of State for Home,” said senior Congress MLA Suresh Routray.

The ‘Hartal’ affected normal life in Bolangir, the native place of the teacher, and Kalahandi, where she worked.

Some sporadic road blockades were reported from a few districts, but police were swift to remove them.

Paradip Port, Nalco and other industries in the state functioned as usual, a senior police officer said.

The Congress said it would be continuing the protests till Mr.Mishra resigns. 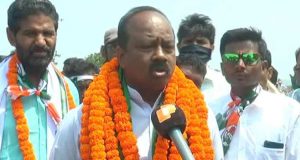