The total number of GSTR-3B Returns filed for the month of October up to 31October, 2020 is 80 lakh.

The total revenue earned by Central Government and the State Governments after regular settlement in the month of October, 2020 is ? 44,285 crore for CGST and ? 44,839 crore for the SGST.

The revenues for the month are 10 Percent higher than the GST revenues in the same month last year.

The growth in GST revenue as compared to that in months of July, August and September, 2020 of -14PC, -8PC and 5PC respectively clearly shows the trajectory of recovery of the economy and, correspondingly, of the revenues. 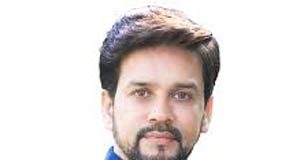 Braja Mishra - February 19, 2021 0
Bhubaneswar: Union Minister of State for Finance Anurag Singh Thakur has said that the Union Government is supporting all states, including Odisha...