Bhubaneswar: The All-India Survey on Higher Education (AISHE) 2019-20 released by the UGC shows the number of girls is higher than boys at M Phil, post graduate, integrated and certificate courses in Odisha.

As many 7,09,363 students have enrolled in various higher education institutions in the State, of which a lion share (4,40,388) students studying in private or aided institutions, as per the report released recently.

Of the total, 50,717 girls have enrolled at the postgraduate (PG) level against the boys enrolment of 47,838. As many as 584 girls have been admitted in M Phil courses while only 419 boys enrolled for the courses in various institutions of the State.

A total of 9150 students have got admission into certificate courses in Odisha, of which 5748 are female and 3402 are male students.

Similarly, 4452 boys enrolled for integrated courses while the number of female students at this level is six more then the boys.

Girls also outnumber boys in enrolment at all level Odia language courses including PG, M Phil and Ph D in the higher education institutes. As many as 38 females enrolled in Ph D in Odia language against 14 boys, while 47 female and 41 male students are there at M Phil level. At PG level, the number of boys and girls are—2353 and 4881, respectively.

The Survey says that 1159 foreign students have enrolled in Odisha institutions, of which 943 are studying under graduate courses. Moreover, girls outshine boys in the M Phil, PG and UG examinations in the State.

The college density (colleges per one lakh eligible population in the age group of 18-23 years) in Odisha is 24, which is lower than the all-India average of 30 States and Union Territories in terms of college density survey.

The average enrolment per college in Odisha has come down to 659 in 2019-20 from 682 reported previous year.

Most of the teaching faculty posts in higher education departments are dominated by men. The Gross Enrollment Ratio on the other hand has decreased subsequently in the State from 22.1 per cent to 21.7 per cent in 2019-20. The GER is calculated for 18-23 years of age group.  However, the Gross Enrolment Ratio in higher education at national level has gone up to 27.1 from 26.3.

The Gender Parity Index (GPI) has also remained below the national average. The GPI of Odisha was 0.88 against the national figure of 1.01 in 2019-20.

The GPI of Scheduled Caste and Scheduled Tribe students pursuing higher studies in Odisha was increased in 2019-20 compared to the previous year.

As per the report, Odisha has featured among the five states at the bottom of the list faring just 0.80 in case of SC students. Though, the GPI of ST students has been increased to 0.85 from 0.78 during the last academic session but the state remained among the bottom five in the country.

Moreover, the Pupil Teacher Ratio (PTR) in  the higher educational institutions in Odisha has come down from 27 to 25 in 2019-20 while the national  average PTR is 26.

There are 17 universities exclusively for women across the country including one in Odisha. State also has two dual mode universities, which provide education through both regular and distance mode. 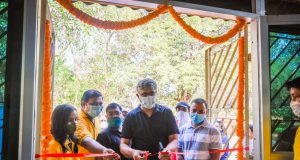 City Gets Library In Forest Park