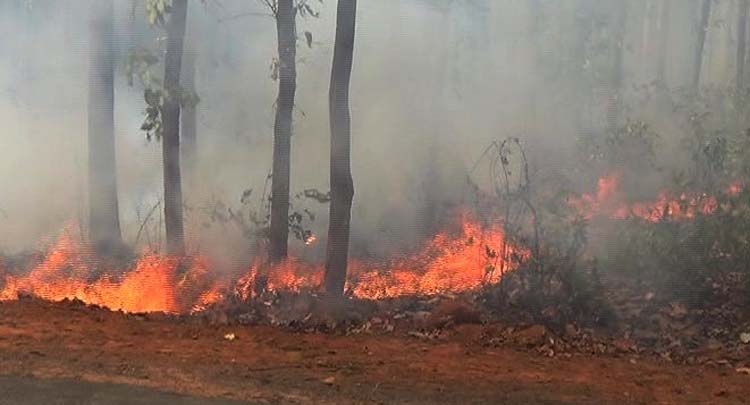 Bhubaneswar: While the Odisha Government Thursday claimed that the forest fire in the Similipal National Park and other forests have been contained to a large extent even as the incident has generated a political storm a day before commencement of the second phase of Budget session of the State Legislative Assembly on Friday.

The Forest Fire Task Force headed by former PCCF Sandeep Tripathy said the wildfire in different forests has been brought under control. “The fire situation in the state is totally under control now,” he said.

Dr.Tripathy said the entire state has registered only 1048 FSI (forest survey of India) satellite based forest points against 497 points on Wednesday with Similipal reporting only 5 fire points as against 26 to 24 points in the last two days.

Besides, parts of Similipal have experienced rains on Wednesday which would possibly prevent any further proliferation of fire in Similipal National Park, he said.

The IMD, Bhubaneswar, has also predicted intermittent rains in most parts of the state for next three days which would be positive development for forest fire mitigation, Tripathy said.

He said though the position is under control, the state is on full alert to combat any recurrence of fire given that major forest sire season is still left.  “The leave of forest staff has been cancelled by the government and a detailed review of video conferencing with stakeholders being regularly done,” he said.

The massive infrastructure up-scaling and infrastructure in terms of engagement of more fire watchers, almost doubling of lead blowers, with massive community engagement & mobilization coupled with day and night efforts of field staff is helping in containing fire, he said.

A fortnight after the fire broke out in Similipal National Park, one of the largest bisosphere in Asia, Additional Chief Secretary, Forest and Environment Mona Sharma visited Similipal Tiger Reserve and assessed the situation.

Meanwhile, following the instruction of Union Environment and Forest. Climate Change Minister Prakash Javadekar, a three-member the Central Team arrived in Bhubaneswar to assist the Odisha government in containing the unprecedented devastation in the National Park.

Amit Mallick, Inspector General of Forests (IGF) of National Tiger Conservation Authority (NTCA) reached the State Capital. He along with Subrat Mohapatra,  Deputy Director General of Forests (Central) of the Ministry’s Regional Office in Bhubaneswar, who is also a member of the Central Team, will visit the National Park to take stock of the situation and tender expert technical advice for early dousing of the forest fires.

Meanwhile, the forest fire incident has led to a political storm in Odisha as the opposition BJP and Congress hold the state’s BJD Government responsible for the inferno.

They accuse the State Government of remaining silent during initial days for which the forest fire spread to many areas in Similipal and other forests.

“We demand an apology from the State Government for its inept handling of the forest fire situation in Similipal and elsewhere in the state. Had the State Government acted promptly, many precious wildlife and medicinal plants could have been saved. We will raise the issue in the Assembly tomorrow,” senior Congress MLA Santosh Singh Saluja said.

BJP Chief Whip Mohan Majhi, who hailed from a tribal dominated, mineral rich and forested Keonjhar district slammed the State Government and alleged that the forest fire was man-made. He said that the forest was deliberately set on fire to erase evidence of deforestation made out of the CAMPA funds, he said.

The BJP leader said his party will certainly take up the matter in the Assembly. As both the opposition parties are gearing up to take on the government over forest fire, Governing BJD General Secretary (Organization) and Lawmaker Pranab Prakash Das Thursday rushed to Similipal along with his party activists and helped the forest officials in extinguishing fire in Similipal National Park, which is emotionally attached to the people of Odisha for its rich biodiversity.

Tathya Correspondent - October 14, 2022 0
Bhadrak: For the first time in any by-election for Assembly seat, the Governing Biju Janata Dal (BJD) is facing a rebel jolt...