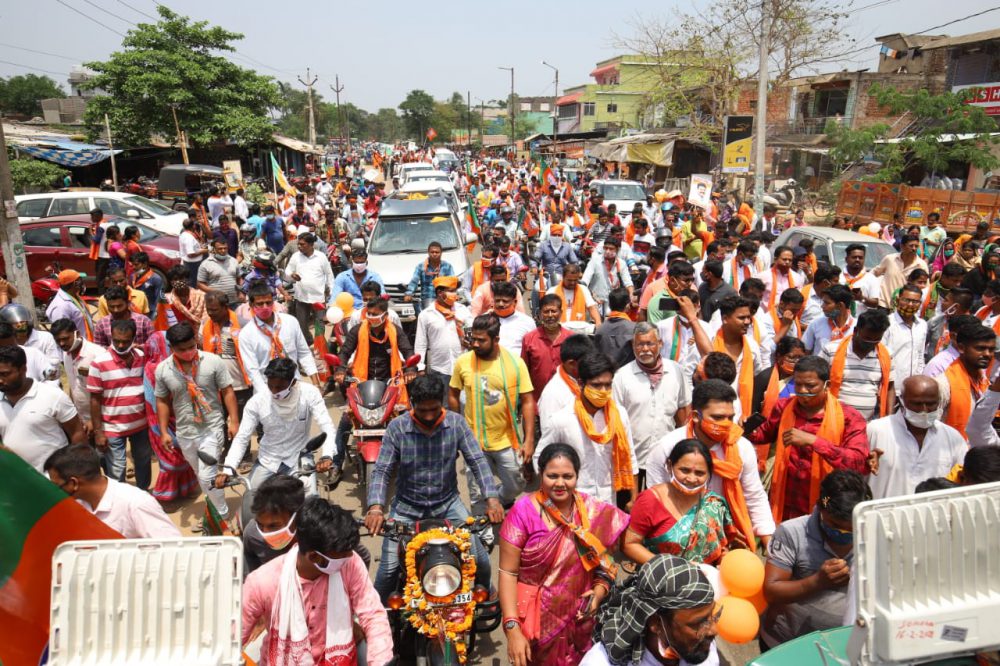 Bhubaneswar: The election campaign for the Pipli by-poll has reached its climax with both the ruling BJD and opposition BJP putting their all out efforts to win the seat, held by Pradeep Maharathy since 2000.

While the BJD had deployed its entire rank and file in Pipili constituency, considered to be the party’s fort, the BJP is determined to win the seat by mobilizing the people by raising various issues.

Though the top BJP leaders like Baijayant Panda, Aparajita Sarangi and D Purendeswar and others criticized the state’s BJD government and held it responsible for no development of Pipli even though the place is located barely 25 kilomter from the state capital, Mr.Pradhan preferred to motivate people by pleading peace for the place.

All along his address, Mr.Pradhan urged people to vote for Lotus symbol in order to ensure that the peace prevails in Pipili area, which he said has been disturbed since a long time for some reasons or the other. “The Pilili and its people will certainly progress if peace returns. This can only be possible if BJP candidate Ashrit Pattanyak is elected to the Assembly from here,” Mr.Pradhan said while addressing people at Danda Mukundpur, Satasankha and Pattnaikia Chhak.

The BJP leader Mr.Patra, alleged that the goons of the ruling party have disturbed peace in Pipili. He said the BJP will ensure development and peace.

The by-poll is being held in Pipili after the demise of BJD MLA Pradeep Maharathy in October 2020. The BJD has fielded Maharathy’s son Rudrapratap. The BJP has repeated its 2019 defected candidate Ashrit Pattnaik who lost the polls last time by 15,000 votes from Pradeep Maharathy.

While Congress candidate Ajit Mangaraj is being treated at a hospital in Bhubaneswar after being detected COVID-19 positive, his party men and women are campaigning for him.

Mr.Patnaik during his virtual mode campaigning Monday took advantage of the polling date at Pipili assembly constituency which happens to be the 23rd death anniversary of his legendary father Biju Patnaik.

The polling for the Pipili by-elections is scheduled to be held on April 17, which incidentally happens to be the 23rd death anniversary of Biju Patnaik, on whose name the ruling party is formed and ruling over Odisha since 2000.

“The people of Pipili always have remained with the Biju Janata Dal, which indicates their  (people) love and affection towards Biju Babu and Biju Parivar. We are going to observe the 23rd death anniversary of Biju Patnaik on April17,” Patnaik told the people of Pipili while addressing them through virtual mode.

While seeking votes for the party candidate Rudrapratap Maharathy, Pradeep Maharathy’s son, the BJD president also preferred to give thrust on his party’s vote bank- the women- who have all along stood by the party in all the previous elections.

During his interaction with the voters of the Pipili segment from Bhubaneswar through virtual mode, Patnaik made a special appeal to women to come out in large numbers and exercise their franchise on April 17, the death anniversary of Biju Patnaik.

“Be it the farmers’ issue or welfare of the poor, Odisha has made a mark for itself at the National-level. The mothers of Odisha are leading several projects under Mission Shakti. This is a major achievement in the direction of women empowerment which the party has always stood for,” Mr.Patnaik said.

Appealing to the voters to vote for the conch symbol of the BJD, the chief minister he would personally look after the development of Pipili-Delang area.

Patnaik said he would have been happy to physically go to Pipili to meet the people, but for the COVID-19 situation. “As COVID-19 restrictions are in place I am not able to go to meet you. I know many of you will assemble if I visit Pipili, which is not in accordance with the COVID-19 protocol,” he said.

Mr.Patnaik also did not forget to make people aware of wearing face masks while going outside including to the polling booths.

During his entire speech, Mr.Patnaik never mentioned the name of any rival party including BJP or name of any leaders except talking on Biju Patnaik, Women, Mahatma Gandhi, who stayed in Pipili area for seven days during his visit to the state 100 years ago.

Meanwhile, BJP’s fire brand Bhubaneswar MP Aparajita Sarangi during the day campaigned for party candidate Ashrit Pattnayak and raised questions on the “no development” of Pipili-Delang area which is located nbarely 25 kilometer from the state capital.

Ms.Sarangi alleged that the people have not got the assistance for the damages done during the 2019 Fani cyclone and angwanadi workers are frustrated for not getting their dues. She said that even the women self help groups are not getting credit links and therefore unable to make progress due to negligence of the BJD, which has been governing the state for over two decades. She appealed to voters to change the trend by electing the BJP candidate and vote for Lotus symbol.