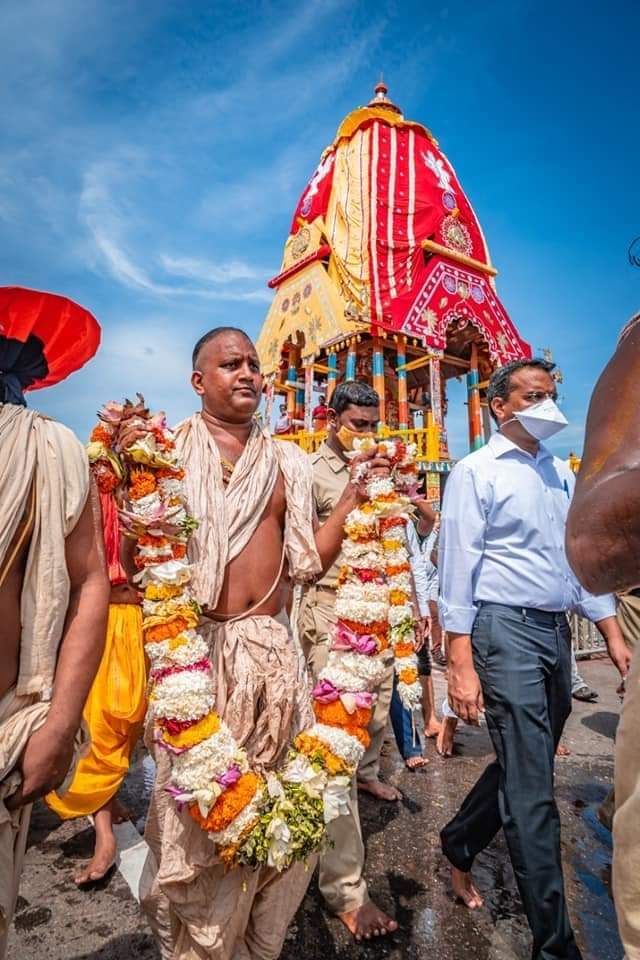 Puri: As the countdown begins for the second consecutive devotees less Ratha Jatra of Lord Jagannath, the three gigantic chariots were pulled to the Lion’s Gate (Singhadwara) of Srimandir after the ‘Agyan Mala’ (order from the Lord) reached Ratha Khala.

The chariot pulling is scheduled to start from 3 PM on Monday after the Puri King, Gajapati Maharaja Divyasngha Deb performs the rituals of Chhera Pahanra (sweeping of chariot). The procession of the sibling deities will begin at 8 AM, he said, adding that the program may be advanced as the servitors are fully cooperating with the administration.

About 8,000 people including servitors, security personnel, SJTA officials, district administration officials, media persons and others have undergone RT-PCR test before the festival. Only COVID-19 negative persons will be allowed to participate in the festival,” he said.

Chief Administrator of SJTA Dr.Kumar formally extended invitation to Jagadguru Sankaracharya of Puri Govardhan Peeth, Swami Nischalananda Saraswati to visit the Lords on chariots as per tradition before they are pulled.

The Shankaracharya will visit the chariots along with six of his disciples.

The Shankaracharya welcomed the SJTA delegation and urged the people to watch the festival through television instead of gathering near chariots. The team also briefed the Shankaracharya about the ongoing preparations and arrangements for the massive event.

The Sankaracharya has accepted the invitation and he will come to Rath Jatra on Monday with six of his disciples, the SJTA Chief said.

In the meantime, the Puri District Administration imposed the curfew from 8 PM of Sunday till 8 PM of Tuesday, official sources said.

The administration imposed the restriction across the 3-kilometre long Grand Road from Shree Jagannath Temple to Sri Gundicha Temple where all activities excluding medical emergencies are prohibited. As many as 65 platoons (1 platoon comprise 30 personnel) security personnel have been deployed for the smooth conduct of the Lord’s annual festival amidst the prevailing COVID-19 pandemic.

The security forces will also be deployed on rooftops of different buildings on both sides of the Grand Road in order to ensure that the people do not congregate in large numbers to witness the festival from residential houses, hotels, lodges and guest houses.

Though there was no such restriction on the people witnessing the Ratha Jatra from rooftops last year, the administration this time banned such practice after it came to the notice that some hotels, lodges and guest houses book rooms with provision of allowing people to witness from the rooftop. Even some local people were found to have invited their relatives and friends to allow them to see the festival from their houses.

Puri district Collector Samarth Verma said that the people are urged not to come out of their houses during the curfew period and make crowd on the Grand Road. The measure is taken keeping in view the public health and to check spread of the infection among people. He said the people can witness the festival through their television sets as the government has made arrangement to give free of cost feed to different channels and web portals.

As the three chariots – Lord Balabhadra’s Taladhwaja, Lord Jagannath’s Nadighosh and Devi Subhadra’s Darpadalan – are ready to roll on the Grand Road, Director General of Police, Abhay reviewed the security arrangements and he too appealed all including the people of Puri to cooperate in implementation of the curfew orders in public interest.

“With the cooperation of the residents of Puri and blessings of Lord Jagannath, all the rituals are underway smoothly so far. We hope the mega festival will be undertaken tomorrow peacefully in compliance with all SOPs,” stated Puri SP Kanwar Vishal Singh.

He said all the lanes and by-lanes in Puri town are barricaded and adequate police forces have been deployed.

As maintaining social distancing may not be possible in such a mega festival as more people’s participation is required for procession of the deities, the administration has ensured that only COVID-19 negative persons and those fully vaccinated are allowed to take part, an official said.

The arrangements have been made for providing healthcare to the servitors who will pull the chariots. A green corridor is created for the emergency situation, he said. 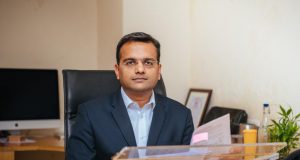