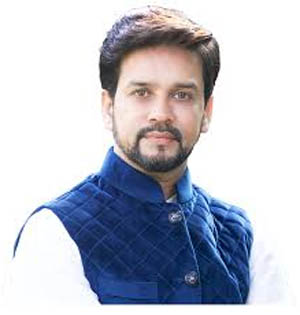 Bhubaneswar: Union Minister of State for Finance Anurag Singh Thakur has said that the Union Government is supporting all states, including Odisha and allowing additional borrowing to ease revenue position.

In an exclusive interview via e-mail by Tathya News Agency on Union Budget 2021-2022 and Economic Survey 2020-202, Singh revealed that Odisha has been allowed additional borrowing of Rs.7145 Crore to ease stress on revenue position.

Tathya : Odisha’s share tax was budgeted at Rs.36,300 crore in 2020-21 (Budget Estimate), which has been reduced to Rs.25,460 crore in revised estimate. This will worsen the revenue position of Odisha. How does the Centre plan to help the State to tide over the situation?

Thakur: There is no such plan of including ‘Natural Calamity’ as a Criteria at the moment.

Tathya: A declining trend in devolution of State’s Share in Taxes has been witnessed over the years. Will the Government of India arrest the trend as it conflicts with fiscal federalism as enshrined in the Constitution of India?

Thakur: There is no declining trend in devolution of state’s share in taxes. The devolution to the states decreased from 42 percent to 41 percent as a result of Jammu & Kashmir moving to the Union Territory and their share will be paid from the union’s share.

Thakur: There is no such plan on elimination of any cess and surcharge on customs duty and direct taxes at the moment.

Tathya: Central Transfers one of the methods to reduce disparity between rich and poor states. It is noticed that central transfers to states are going down and how are you going to address the issue in the budget for 2021-21.

Thakur: Central transfers to states are not coming down and we have accepted the Fifteenth Finance Commission’s recommendation of 41 percent devolution to the states. The states have been adequately supported during the pandemic as well by the Centre and the RBI.

Tathya: One of the biggest challenges faced by youth is unemployment. What steps have been taken to address the issue in Budget 2021-22.

Thakur: Spending on capital expenditure leads to a very high multiplier effect of close to 2.5. This will lead to job creation as we will spend on building roads, railways, ports, cold storages, warehouses, airports etc. We have announced the creation of 7 Mega Textile Parks in this budget which  will generate lakhs of jobs. We are spending close to 1.97 lakh crores on the PLI scheme which are manufacturing intensive and will generate jobs. Our focus is to make India a leader in the skilled workforce and we will strive to work towards that.

Tathya Correspondent - March 2, 2022 0
Bhubaneswar: The State GST (SGST) collection has recorded a 47 per cent growth during the month of February 2022 against the collection...