Bhubaneswar: Despite repeated requests from the State Government, the Centre is in no mood to open the Awaas+ portal to include listed out eligible beneficiaries under the Pradhan Mantri Awaas Yojana Gramin (PMAY-G).

This was indicated from a written statement given by Minister of State for Rural Development, Sadhvi Niranjan Jyoti in Rajya Sabha on Wednesday.

However, the Centre has allowed synchronization of the data from the State-owned Rural Housing Portal with the Awaas+.

Replying to a question of RS Member, Dr Sasmit Patra, Shrimati Sadhvi said the Awaas+ survey exercise was initiated under the PMAY-G in January 2018 with an initial deadline of March 31, 2018 for the identification of eligible households which were left out and were not covered in the SECC 2011 survey. This deadline was extended four times finally till March 7, 2019, she said.

During the exercise, she said, including two special windows given after the deadline in wake of the FANI cyclone, the State of Odisha registered 13,20,945 potentially eligible households.

Meanwhile, the BJP MPs from Odisha have alleged irregularities in implementation of PMAY-G in the State. The matter was taken up with the State, however, the Action Taken Reports (ATRs) were delayed despite repeated reminders, the Minister said.

In order to resolve the issue, a meeting was conducted on August 11, 2022 under the chairmanship of Union Rural Development Minister wherein the Odisha  Panchayati Raj Minister committed to adhere to scheme guidelines in implementation of the scheme.

This was reiterated in the final action taken report (ATR) submitted by the State, which was also accepted, she added.

“However, the request for the opening of the Awaas+ portal for re-survey has not been acceded to, since sufficient time had been given to all the States/UT by way of multiple extensions, including Odisha where special windows were also granted,” the Minister said.

She further made it clear that the Rural Development Ministry has not allowed opening of Awass+ portal for any State/UT for re-survey.

Notably, the State Government has been demanding for the opening of the Awass+ portal to include over six lakh Odisha residents, mostly belonging to tribal communities. 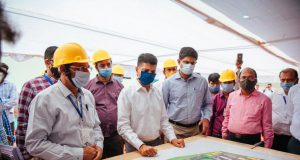