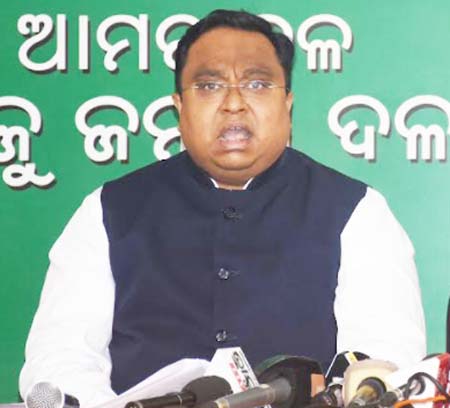 Bhubaneswar, Nov 30: The Governing BJD on Wednesday slammed the BJP-led Government of India for neglecting and cheating the people of Padampur, which is going for by-poll on December 5.

Holding a press meet, BJD Spokesperson Dr. Sasmit Patra stated that BJP has a long history of cheating the people of Odisha.

“From farmers to youth, railways to national highways, paddy procurement to rural housing, telecom connectivity problems to banking network problems, the BJP has been indulging in fake promises (Jumlas) and cheating the people of Odisha,” he said.

The BJP has made fake promises before the people of Padampur and Odisha, Patra said.

Speaking about the Padampur railway line, the BJD leader said, in 2018, Union Minister Dharmendra Pradhan tweeted and said that the Padampur Railway line has been sanctioned. It’s been four years but not a single brick has been laid, he said.

“Union Railways Minister Ashwini Vaishnaw said that if we give us land today, we will start the project tomorrow. But in 2019 his Ministry said in the letter that the project is not viable and should be shelved. Whom is the BJP trying to hoodwink and cheat ? The people of Padampur and Odisha?,” questioned Dr Patra.

When CM wanted to help the farmers of Odisha by providing Rs. 200 crores as input subsidy, the BJP led Centre then stopped it quietly calling up the Election Commission under the pretext of the Model Code of Conduct in Padampur, he further said.

The BJD Spokesperson also questioned why the BJP is turning its face away from helping the farmers by fixing it at Rs. 2930 per quintal of paddy.

Dr.Patra also rakes up the imposition of 18% GST on Kendu leaf.

For three years Odisha has been demanding rural houses for the poor but the Centre has blocked it. These houses are mostly for the western and southern districts of Odisha, comprising mostly tribals.

Even today people have to climb down mountains and climb trees to get a telecom network. Similarly, Sambalpur to Cuttack highway is a living example of the neglect of national highways by Centre apart from many others, the BJD leader said.

He also pointed out that Odisha has one of the lowest banking presence in the entire country. No banking facility in every GP of the State.

The BJD leader further affirmed that on December 5, the people of Padampur will give befitting reply to the BJP for all these fake promises and cheating of the people of Odisha by the BJP.