Bhubaneswar: It seems after the important President and Vice-President elections, Odisha’s main opposition party, the BJP, is changing strategy for the state.

The saffron party which became ‘friendly’ with Naveen Patnaik’s BJD following the 2019 general elections, now appears to be bracing for new strategies.

The party has already appointed its top hardliner Jaynarayan Mishra as the Leader of Opposition, who immediately spelled out the party’s aim of making “BJD Mukt Odisha”. Ace organizer Sunil Bansal has been made the in-charge of state BJP.

After Mr.Mishra’s appointment, BJP’s topmost strategist and Union Home Minister Amit Shah showed up for a two-day visit to the state and reviewed the party’s position in the state.

Mr.Shah, considered the architect of BJP’s growth, was not satisfied with the state of affairs of the party in Odisha. However, he boosted the morale of the rank and file with the assertion, “BJP will form government in Odisha like other non-Hindi speaking states.”

Mr.Shah asked the party leaders not to solely depend on the central leadership for winning assembly elections in Odisha, but wanted the local leaders to play major roles.

“It is for the local MLAs, MPs or the aspiring candidates to keep the booths ready. What can Modi and Shah do to booth number 55 in a remote village of Nuapada district,” the saffron ace strategist reportedly asked at the meeting.

Incidentally, Mr.Shah’s “Mission 120” call has invited criticism for the party and made the saffron organization laughable before the opponents who made no mistake to cite the instance.

Looking ahead at 2024 general elections, Shah knows pretty well that the BJP cannot dislodge Naveen Patnaik from Odisha who is entrenched in the state for his welfare schemes and strong organizational support. Though BJP has many welfare and attractive pro-people programs in hand to market the party, it does not have a good base at the booth level.

This was evident from the recently concluded rural and urban polls. Of the 852 Zilla Parishad seats, Naveen’s BJD won 766 Zilla Parishad seats, BJP got only 42 and the Congress 37. However, there is still a silver lining as the BJP’s vote share still stands at 31 per cent, though it dropped from 34 per cent.

Although Congress, the other opposition, is constantly declining, the BJP strategists are worried that the lost vote share of Congress is not coming to BJP, but benefiting the BJD. Shah and others know it well that the BJP has to have a straight fight with BJD to wrest power in Odisha, with Congress completely out of the fray. BJP has a long way to go to meet the challenges of BJD and that will be only possible if the saffron brigade makes its base strong at booth level.

In another recent rethinking, BJP has appointed Sunil Bansal, a soft-spoken and smooth strategy maker as the “Prabhari” (in-charge) of Odisha along with West Bengal and Telangana. Though many people have seen the efficiency of Mr.Bansal in Uttar Pradesh assembly elections, he being given charge of three states, raises questions on the BJP central leadership’s intentions to launch an all-out war against BJD.

Earlier, D Purndeswari and Arun Singh were appointed Prabhari for Odisha alone. But, now Bansal gets three states for which he may not be able to fully concentrate on Odisha. Mr.Bansal, known for his organizing skills may quietly strengthen the BJP at grass root level, which will yield results for the party.

Prime Minister Narendra Modi or Union Minister Amit Shah may visit Odisha several times before 2024 polls, and the making of a ‘Daughter of Odisha’ as the President of India may also yield positive results. But, the fact remains that they have to create an impression among the people of Odisha that BJP is a real opposition and not a “friendly opposition,” to the state government.

For about three years, BJD, by helping the Mr.Modi Government on several occasions, has given a strong message to the people that the BJP is a friend of the regional party. It is a fact that the NDA government and Modi gained from the Naveen’s help, but at the same time, an impression has gone down the line that BJD and BJP are not separate and both sides of one coin.

BJD’s silence on the price rise and imposition of GST on poor people’s food, has further strengthened public impression that both have soft corner for each other.

Therefore, before going to fight, the BJP has a major responsibility to make people convinced that they are the real opposition and not an under-cover alliance partner. Otherwise, people will not have any faith in BJP to cast their votes after rejecting the BJD. The political analysts and the hardliners in the party opine that Shah and Modi have to take a strong decision.

This is also the strategy of Naveen Patnaik that he has adopted for the last 20 years. He has sacrificed many leaders, dismissed ministers, changed portfolios and also dumped many politicians in order to further glorify the “clean image” of himself.

The people have all along liked it and backed Naveen for punishing the arrogant politicians. If Naveen can become harsh against his party leaders just to upkeep his image, why cannot BJP take the same action against the people in power in the state, the hardliners believe.

However, the national leadership of BJP is not in mood to take on the Tall Man of this eastern state. The Central BJP is now in a mood to bring in changes in party hierarchy and is trying to improve its strength at grass root level, so that it will generate confidence among the ground troops of the party, who feel disheartened after twin poll failure.

Now the Mantra of Amit Shah to improve organizational strength is likely to boost morale of the rank and file of the saffron party, insiders feel. 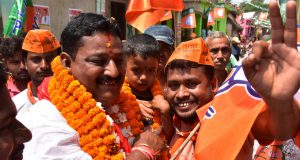