Bhubaneswar: While Padampur Assembly Seat registered a record voters’ turnout of 81.29 Per Cent in the By-Poll both the Governing BJD and the Opposition BJP are upbeat about their success.

Trilochan Patra, Returning Officer, Padampur said that  a total of 2,09,309 of 2.59 lakh electors exercised their franchise and sealed the fate of 10 candidates in the fray.

Among these candidates BJD’s Barsha Singh Bariha, BJP’s Pradip Purohit and Congress’ Satya Bhusan Sahu are on the forefront.

This time the bypoll was necessitated following the death of BJD MLA Bijaya Ranjan Singh Bariha in October 3, 2022. The votes would be counted on December 8, CEO Office said.

The Padampur By-Poll has encouraged both the BJD and the BJP and both the parties fought the battle with no hold bar, political observers say.

“Whenever, there is record voting, the main opposition candidate becomes winner. Therefore, we are optimistic to win the seat in a comfortable margin. The people have been fed up with the BJD’s 22 year old government,” said Leader of Opposition Jay Narayan Mishra of BJP.

Pritivraj Harichandan, General Secretary BJP claimed that party nominee Pradip Purohit will win the seat at a margin of around 10,000. “The massive turn out of voters shows the people’s anger against the government of the day,” he said.

BJD Senior Vice President and EX-MP Prasanna Acharya, however, rejected the BJP’s claim and said: “The people have been seen our developmental activities and leadership of Naveen Patnaik. The people of neighboring Bijepur had given massive mandate to BJD in 2019 by-poll. Our winning margin this time will be more than the previous poll.”

Asked the reason behind the massive voters turn out, Senior Vice President of BJD Mr.Mishra said: “There is nothing unusual about Padampur. This rural constituency used to go for 75% voting ratio. As this time it was a by-poll, a rise in voting ratio by 2 to 3 per cent is normal.”

The By-election in Padampur was also held on major issues like demand for a separate district status for the area, crop insurance and drought input subsidy, railway project and migration problem,

Veteran Congress Lawmaker Suresh Kumar  Routray, however, admitted that his party candidate will face a defeat. “The BJD is number one followed by BJP and we will get third place. Both BJD and BJP have spent crores of rupees in Padampur By-Election. 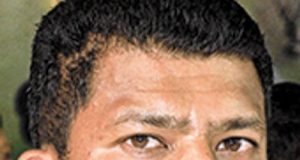