Before leaving for Barabati Stadium in Cuttack for the India-South Africa T20I, Mr.Ganguly went to Naveen Niwas.

A senior official in Naveen Niwas said “It was a courtesy call”.

After the meeting, Mr.Ganguly went to the stadium and later Mr. Patnaik joined to watch the match at the stadium. 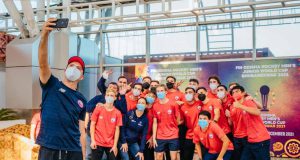