SAIL, a Maharatna Company is one of the largest producer of Steel in India having 08 Steel Making complexes including Rourkela Steel Plant.

Mr.Tripathy, a 1981 Batch IAS is known for his positive contribution towards development of the State, while taking up innovative initiatives.

Served in several crucial assignments in the Odisha Government, Mr.Tripathy is an independent minded mandarin and has in-depth knowledge on Regulatory Mechanism such as Land and Revenue Administration, Development Sector such as Industry, Tourism, Culture, People’s Oriented Sectors like Education, ST SC Development.

Union Government in Ministry of Steel taking into consideration all these aspects has appointed him as Independent Director of SAIL.

Similarly, taking his honesty and integrity as an asset, Central Vigilance Commission (CVC) has appointed Mr.Tripathy as an Independent External Monitor of Gas Authority of India Limited (GAIL). 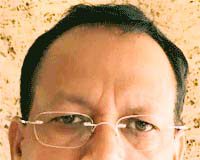