On this occasion Chief Secretary SC Mahapatra felicitated the winners of the competitions on different creative activities like essay, story and debate.

Mr.Mahapatra complimented officers of the department for their expertise in implementation of financial reforms and better financial management in the State.

From a fiscal deficit State, Odisha has now emerged as a speedy developed State in the country. Financial reforms and financial management have played an important role in this journey, he said.

Mr.Mahapatra appealed to the officers and staff to take Odisha to a new height of development.

Speaking on this occasion, Principal Secretary, Finance, Vishal Dev said that Odisha has been recognised as a pioneer State in fiscal management in the country. He advised the officials to use technology to expedite their working style to achieve the target.

The Cultural Association President Tarun Chandra Pal presided over the function while secretary Bhaktaram Patnaik delivered the annual report of the association.

The officers and staff of the department presented a reform-oriented family drama named Dhara Akhire Luha. Their artistic performance made the audience spell bound. A souvenir of the Cultural Association Kautilya was unveiled on this occasion. 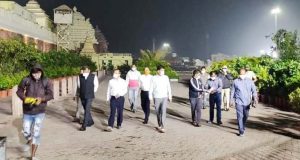