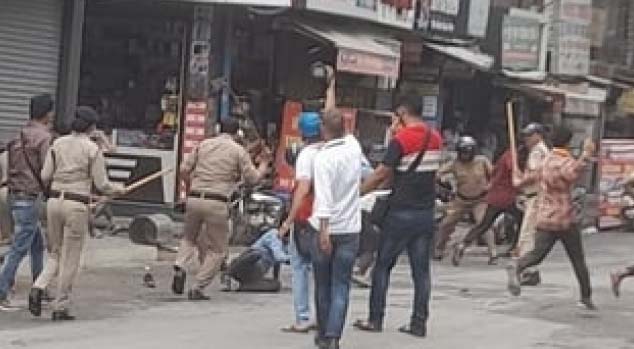 Cuttack : Over a thousand army job aspirants on Friday staged a strong protest against the Centre’s new Agnipath scheme for the recruitment of armed forces.

Demanding rollback of the Agnipath scheme or Tour of Duty, age relaxation in recruitment and conduct of the common entrance examination (CEE) for recruitment of armed forces in the country, the aspirants staged agitations before different parts of the city.

The aspirants first staged demonstration before the army recruiting office at Cantonment Road, then moved to Ring Road and other places in the city.

Some of the aspirants tore the road-side hoardings and broke down police barricades. The protesting aspirants also faced-off with the police while trying to blockade Ring Road disrupting traffic services.

As the situation turned tense, police resorted to mild lathicharge to disperse the agitators. However, police forces intervened at the right time and dispersed the mob.

“We need immediate cancellation of ‘Tour of Duty’ (ToD). Besides, we demand the Centre to hold a written examination for recruitment as soon as possible,” said an agitating job aspirant.

“We have already qualified the physical fitness and medical tests to recruit in the Indian army. However, the written examination, which is the final test, has not been conducted despite announcing dates several times. We are not able to appear for other interviews because of it,” he said.

“If a politician becomes a MLA or MP, he/she is entitled to get pension. But, if we join the army to serve our motherland and may sacrifice our life, we will not get the benefit,” said another aspirant.

If the scheme is implemented, a youth can serve in the Indian Army for three and half years because he has to undergo training for six months. After four years his future will be dark, he further said.

“Over a thousand of students have gathered to lodge their grievances before the army office. Some of them moved to another place and were aggrieved. However, police immediately swung into action and controlled the situation,” said Cuttack DCP Pinak Mishra.

“We have detained some students. After interrogation, we will relieve them,” he said. About five platoons of police force were deployed in various places of the city to control the agitators, Mishra added.

The Agnipath scheme was announced on June 14 to recruit jawans into the Army, Navy and the Air Force for a four-year period followed by compulsory retirement for most without gratuity and pension benefits.