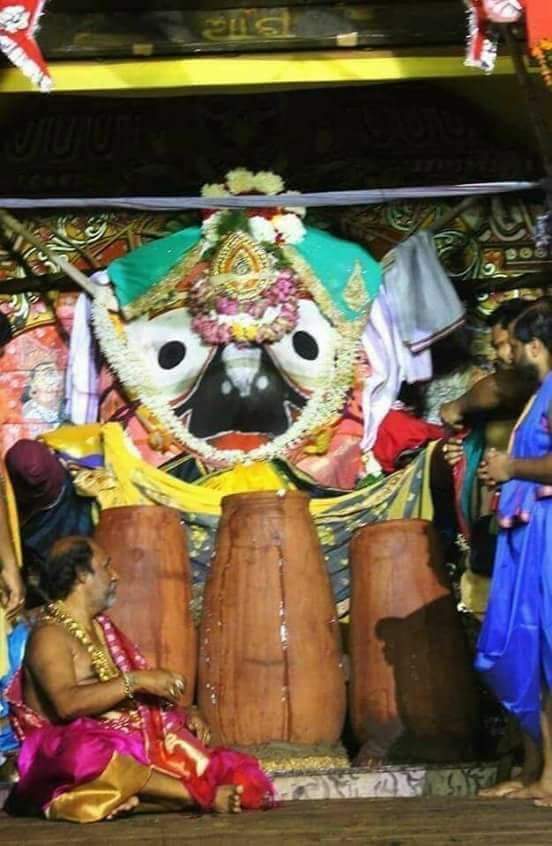 Puri: A day before Niladri Bije, the Lord Jagannath along with Lord Balabhadra and Devi Subhadra were offered a special drink called ‘Adhara Pana’, a special concoction of a sweet juice on their respective gigantic chariots today at their chariots. ‘Adhara’ means ‘Lip’ and ‘Pana’ is a sweet-scented drink.

After performing the daily ‘nitis’ of the deities, the Trinity were adorned with new clothes for ‘Sahana Mela’.

Nine large barrel-shaped pitchers, filled with the drink, were placed before the three deities on the chariots (three on each chariot). The juice is offered as a token to the lips of the deities deified in their individual chariots to break their fast or ekadasi. The priests recited ‘Sodasa Upachar’ and offered the drinks to the deities.

Soon after the completion of the rituals, the barrels were smashed on the floor of chariots making Adhar Pana to spill all over the wooden floor.

As per the rituals, the smashing of these earthen pots is made to ensure that devotees do not get it and all the minor deities or the Parswa Devtas present at the side of three chariots consume it and get satiated once they consume the Pana.

Lord Jagannath and his siblings would remain on their respective chariots for another day and enter the sanctum sanctorum of the temple tomorrow in a ceremonial ‘Pahandi’ procession to be conducted by the Daita servitors. Before entering the temple, the deities would be offered Rasagolla Bhog on the chariots. 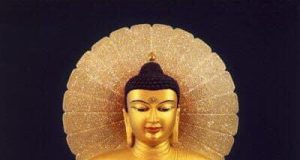 Tathya Correspondent - May 15, 2022 0
New Delhi: Prime Minister Narendra Modi will participate in the corner stone laying ceremony for the construction of a unique  center for...