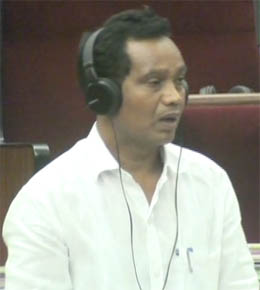 The cases were filed by the concerned tehsildar to bring back the temple land under section 16-A (1) of the Shree Jagannath Temple Act-1955.

Efforts are on to recover the remaining encroached land, the minister added.

Saraka further informed the House that around 60,822.195 acres of land in the name of Lord Jagannath, has been identified in different districts of Odisha and outside the State. Of which, 35,321.433 acres of land have been brought to the record of Jagannath Temple, he stated.

However, he said, the exact value of the total land was not estimated as the lands are available in different cities and places of several states.

In another written reply, the Law Minister said the deity has 60,426.943 acres of land in 24 districts of Odisha while a total of 395.252 acres of land of the Lord have been identified in six other States.

The total earnings of Shree Jagannath Temple from its land holdings both inside and outside the State in the financial year 2021-22 was Rs 61,73,86,862, the Minister had said in the House last week.

Out of the total land available in Odisha, 343.656 acres have been sold and 765.5055 acres of land have been acquired for various projects and the proceeds so obtained have been deposited in the Shree Mandir fund, he stated.