New Delhi: Over 2.67 lakh cases have been pending in Orissa High Court, District and other Subordinate Courts in the State for a period of more than 10 years.

This was informed by Union Law and Justice Minister Kiren Rijiju in Lok Sabha on Friday. In a written statement to the Lower House, Rijiju said 33,363 cases are pending in Orissa High Court over 10 years while 2,34,216 cases are pending in various District and Subordinate Courts in the State till July 19, 2022.

In another written reply, the Union Minister said disposal of cases pending in various courts is within the domain of judiciary. Timely disposal of cases in courts depends on several factors which, inter-alia, include availability of adequate number of judges and judicial officers, supporting court staff and physical infrastructure, complexity of facts involved, nature of evidence, co-operation of stakeholders viz. bar, investigation agencies, witnesses and litigants and proper application of rules and procedures.

Further, Mr.Rijiju said the Union Government is committed to speedy disposal of cases and reduction in pendency of cases to improve access to justice in line with the mandate under Article 39A of the Constitution.

The National Mission for Justice Delivery and Legal Reforms, established by the Centre, has adopted many strategic initiatives, including improving infrastructure for judicial officers of District and Subordinate Courts, leveraging Information and Communication Technology (ICT) for better justice delivery, filling up of vacant positions of Judges in High Courts and Supreme Court, reduction in pendency through follow up by Arrears Committees at District, High Court and Supreme Court level, emphasis on Alternate Dispute Resolution (ADR) and initiatives to fast track special type of cases etc. 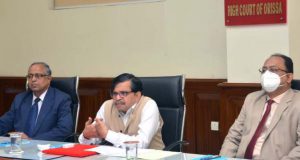