Bhawanipatna: Chief Minister Naveen Patnaik Saturday said that transformation of Kalahandi in the 21st century has gone far beyond the Kalahandi of the previous century.

“There has been significant progress in various areas of development over the past two decades and this transformation of Kalahandi has been made possible by the efforts of farmers, youth and mothers of Kalahandi district,” he said inaugurating a 200-bed special Covid Hospital in Bhawanipatna.

The hospital has been set up in collaboration with Vedanta Group with a special pediatric ward, 16 ICUs and 14 HDU beds.

“With all kinds of modern medical equipment, the hospital will allow people in Kalahandi and surrounding areas to get high quality covidium treatment,” the Chief Minister said.

Highlighting the steps taken by the state in the fight against COVID, the Chief Minister said that work has started on 15 oxygen plants in the state in the last few days and production will begin in these facilities in the next two months.

During the second wave of Covid, the reduction in oxygen levels in patients has put a lot of pressure on the supply of oxygen across the country.

At the same time, Odisha has saved lives by supplying oxygen to 14 states, Patnaik said adding, “It was an honor for the people of Odisha to have the opportunity to serve humanity in such a crisis.”

He thanked the Vedanta Group and its Chairman Anil Agrawal for the hospital and said that the hospital would provide free medical care, diagnostics, medicine and food.

The Chief Minister thanked the people of the district and the doctors, health workers, Asha and Anganwadi workers for their bravery in the face of the second wave of Kovid.

At the event, the Chief Minister once again advised the people to get ready for the third wave and urged everyone to wear a double mask and get vaccinated.

“Whether it’s an epidemic or a natural disaster, we must win if we are prepared in advance,” he said.

“So the people of Kalahandi can get better covoid treatment,” he said.

Kalahandi MP Basant Panda, Rajya Sabha MP Sujit Kumar, Dharmagarh and Lanjigarh MLAs attended the function and appreciated the efforts of the Chief Minister in the setting up of the Covid Hospital.

Attending the event through video conferencing, Vedanta Group Chairman Anil Agrawal praised the Chief Minister for the development of Kalahandi and the overall development of Odisha.

The manner in which the Chief Minister took the lead during the storm and saved the lives of the people has become a topic of discussion around the world today, he said adding, “We have been working in many states, but the experience of working in Odisha has given me the best experience.”

The Vedanta Resources Chairman said, “We have had a long and enriching association with Odisha and its people. With operations in underserved regions like Kalahandi and Jharsuguda, we have taken our social responsibility of being a partner in the state’s socio-economic development seriously and delivered upon that commitment with sincerity. The COVID Hospital in Kalahandi is our humble dedication to the people of Odisha. May it serve them well.”

Deputy CEO Rahul Sharma said, “Under the enterprising and far-sighted leadership of Honorable Chief Minister Shri. Naveen Patnaik Ji, the proactive measures undertaken by Odisha Government, such as collaboration with Panchayati Raj Institutions and community-based response strategy, have been instrumental in robust COVID management in the state. Vedanta Aluminium will continue to extend its support and resources to aid the state government and district administrations in this critical situation and mitigate the health hazards posed by the second wave of the pandemic.” 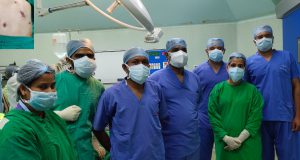 Tathya Correspondent - May 27, 2021 0
Bhubaneswar: Surgeons at the Institute of Medical Sciences and SUM Hospital here performed a rare surgery on a 41-year-old man on Tuesday...