Puri: The annual bathing rituals of the trinity of Lord Balabhadra, Devi Subhadra and Lord Jagannath were held here on Thursday without devotees and amid strict adherence to COVID-19 protocols, officials said.

The ‘Snana Yatra’ is held on the full-moon day in ‘Jyestha’ month of the Hindu calendar, considered to be the birthday of Lord Jagannath, ahead of the Rath Yatra.

Chief Minister Naveen Patnaik conveyed best wishes and compliments to all on the auspicious occasion of Snana Purnima. The Covid crisis shall pass away soon by the grace and blessings of the Lord, and life of all shall be filled with happiness and peace, the Chief Minister hoped.

The district administration disallowed devotees from witnessing the ‘Devasnana’ festival for the second consecutive year in the wake of the pandemic, and beefed up security around the 12th century shrine, imposing prohibitory orders since Wednesday night in order to ensure there is no congregation of people, the officials said.

Puri District Magistrate, Samarth Verma said the state government had made elaborate arrangements for live telecast of the festival.

Mr.Verma said those who took part in the rituals had undergone RT-PCR tests and tested negative for COVID-19, while the servitors who were present during the event were fully vaccinated.

The deities were bathed with 108 pitchers of water drawn from a well called the ‘Suna Kua’ in the temple premises. The trinity was then decked up in the ‘Gajanana’ (elephant attire) or ‘Ganesha Besha’ and the daily food offering or ‘Bhogalagi’ prepared in full public view.

The ‘Chhera Pahnra’ (sweeping the bathing platform) was performed by the royal priest, as the Gajapati Maharaja of Puri, Divyasingha Deb, skipped the ritual in view of the pandemic.

After the ‘Snana Yatra’, the sibling deities are kept away from public view for 15 days, a period in which they are believed to develop fever due to excessive bathing.

The Shree Jagannath Temple Administration (SJTA) Chief Administrator Krishan Kumar said the temple will remain out of bounds for devotees till July 25. 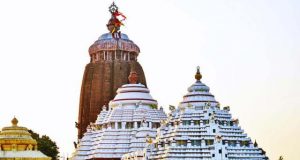