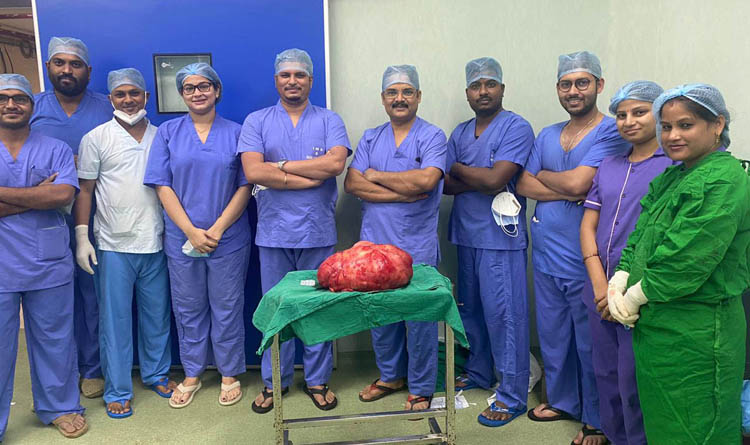 Surgeons at the Institute of Medical Sciences and SUM Hospital, the faculty of medicine of Siksha ‘O’ Anusandhan (SOA), performed a critical surgery on a 34-year-old woman to remove an abdominal tumour weighing more than 10 kg on Thursday.

Madhusmita Dani from Manmunda in Boudh district, who had undergone a surgeries in SUM Hospital in 2012 and 2016 for removal of  similar tumour, was suffering from Retroperitoneal Liposarcoma, a type of cancer which could not be treated by chemotherapy or radiotherapy and surgery was the only option, the treating surgeons said.

Ms.Dani was admitted into the hospital under Prof. Prakash Kumar Sahu of the surgery department on December 21 and a CT scan suggested that she was having a large tumor which had been compressing the kidneys, ureter and vena cava, a major vein which carries deoxygenated blood into the heart, to the sides and pushing the intestines as well. After the investigations, it was decided to conduct the surgery on the last day of the year, Prof. Sahu, who had conducted the two previous surgeries on the patient, said.

The patient had undergone the first surgery at SUM Hospital in 2012 when a huge 15 kg tumour had been removed. She, however, developed the tumour again and was admitted into another hospital for surgery. But the operation could not be successful because of complications.

She was admitted into the SUM Hospital again in 2016 when a 7.5 kg tumour was removed along with her uterus and ovaries.

Tathya Correspondent - September 10, 2021 0
Bhubaneswar: On the occasion of Ganesh Puja, the State Government has achieved another milestone in the ongoing Covid-19 vaccination drive by administering...