Bhubaneswar: Neurosurgeons at the Institute of Medical Sciences and SUM Hospital, SOA’s faculty of medicine here, have come across a rare human tail which is said to be the first bony tail in thoracic region to be reported in the world.

The new born baby had a spinal cord anomaly with a tail at upper back and a Dermal Sinus Pit in the Coccygeal area and this is the only known case of a bony human tail in thoracic area, Prof. (Dr.) Ashok Kumar Mahapatra, eminent neurosurgeon and Vice-Chancellor of SOA, told newspersons on Thursday.

Prof. (Dr.) Mahapatra, who along with neurosurgeon Dr. Rama Chandra Deo, conducted the surgery to remove the tail, said it was a unique case of true thoracic bony human tail in a new born baby.

The baby successfully underwent three surgeries in one sitting which was conducted on November 25 last and had been doing well. It is a rare case and needs to be reported to increase public awareness. Neurosurgeon Dr. Soubhagya Panigrahi was also present at the press conference.

Most people are not born with a tail because the structure disappears or absorbs into the body during fetal development and forms the vestigial tail bone or Coccyx, he said. 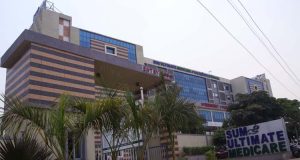