Bhubaneswar: The state has so far administered as many as 46,56,450 doses of vaccine to the beneficiaries across the State.

Due to dearth of vaccines, State Government has not been able to vaccinate more people admitted an official said adding that the state in the past on 3 April set a record by vaccinating 2,71,480 people in 1474 centers.

However, the number has come down to below one lakh due to non-availability of the vaccines, the official admits.

However, Union Minister for Petroleum and Natural Gas Dharmendra Pradhan, who hails from the state blamed senior officials saying that they are trying to paint  a scenario on vaccine shortage whereas in reality there is no such situation.

Stating that there is no dearth of vaccines in the country, Mr.Pradhan said of the 11 to 12 crores vaccine doses distributed across the country, Odisha has received more than 45 lakh doses.

The situation will soon improve once the Centre gives nod to rollout of 2 to 3 more vaccines presently under advanced stages of approval.

On the other hand, a senior BJD leader pointed out that Chief Minister Naveen Patnaik while attending the video conference of chief ministers with Prime Minister Narendra Modi on 8 April has categorically sought 25 lakh vaccine doses for Odisha.

“We are currently able to vaccinate 2.5 lakh persons per day and have capability to increase further. We request that at least 10 days stock of vaccines is ensured for Odiaha,” Mr.Patnaik had said.

This apart, H&FW Minister N K Das had also written two letters to Union H&FW Minister Harsh Vardhan informing that the state is not able to observe “Tika Ustav” properly (between April 11 to April 14), due to shortcake of vaccines in Odisha.

BJD leader and MLA P K Deb ridiculed Mr.Pradhan and suggested him to study facts and figures before making any judgment.

“The Union Minister must know that while Odisha was easily inoculating over 2 lakh beneficiaries a day, it is now managing to vaccinate only a lakh because of the less vaccine supply. On one hand while PM Modi is urging States to speed up vaccination, on the other, dearth of doses has been severely affecting the session plans,” Mr.Deb pointed out.

“If Health Secretary informs the Centre about the situation, I don’t understand how he created problem,” Mr.Deb asked. 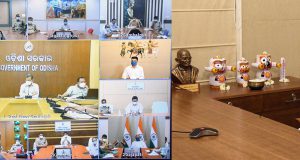 Tathya Correspondent - April 20, 2021 0
Bhubaneswar: Chief Minister Naveen Patnaik on Tuesday appealed the people to cooperate with State Government in its fight against COVID-19 and observe...