At an event in Phulbani, the Chief Minister inaugurated the program by awarding the smart health card to some beneficiaries of the district.

Around 6.50 lakh people of the district can avail the benefits of the smart health card. With this, the BSKY health cards have been distributed in 16 districts of the State.

On this occasion, the Chief Minister lauded Kandhamal district for its tourism and organic crops.

He said that Kandhamal is a land of gold. Organic crops, especially Kandhamal turmeric, are now one of the most popular brands in the country.

“Kandhamal has a lot of opportunities in this regard as there is now a growing interest in organic crops,” he added.

The Chief Minister said that Kandhamal is also a center of attraction for tourists across the country for eco-tourism.

“The State Government is working hard to develop the two sectors,” he asserted.

Inaugurating various projects worth Rs 276 crore for the district, Mr.Patnaik said that special emphasis is being placed on infrastructure.

He announced that a 500-bed Medical College & Hospital would be set up in Kandhamal with an investment of Rs 504 crore in the district with 100 MBBS annual seat intake.

He said that he has directed for the construction of the medical college to be completed on time.

The Chief Minister said that the Biju Setu Yojana with an investment of Rs 120 crore in Kandhamal district has improved communication in 69 gram panchayats.

Around 2 lakh people in the district are benefiting from it, he said.

He informed that the 220/33 KV under construction Grid Station in Baliguda would be completed soon benefiting 70,000 families in K. Nuagaon, Tumudibandh, Kotgarh, Daringbadi and Baliguda blocks.

This will improve the supply of piped water, he added.

Notably, on the occasion of 75th Independence Day, the Chief Minister had announced to provide smart health cards to 3.5 crore people in the State under BSKY.

The Smart Health Card will be provided to 3.5 crore people of 96 lakh families. Each family can avail treatment cost up to Rs 5 lakh per annum. Women members can avail this benefit up to Rs 10 lakh every year.

The beneficiaries can avail health services in more than 200 hospital chains of the country including Odisha. 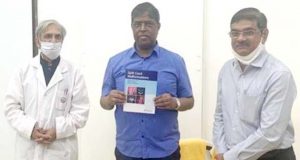