Bhubaneswar: With Nuakhai, the harvest festival of Western Odisha being celebrated across the State, BJD Veteran A U Singh Deo wished the people of Balangir, Western Odisha and Odisha ” A Happy Nuakhai”.

Ex MP Rajya Sabha, Mr.Singh Deo said my greetings to the hardworking farmers, who are ensuring our “Food Security” through their hard labor.

In fact , Nuakhai is the occasion marks the consumption of the first harvested crops and falls on the Bhadraba Shuklapakhya Panchami tithi, which is the day following Shree Ganesh Chaturthi. It is the most important festival in the region and is an official holiday in Odisha.

Nuakhai is celebrated in Balangir, Sambalpur, Bargarh, Jharsuguda, Sundergarh, Sonepur, Kalahandi, Nuapada, Boudh, and the Athmallik Sub-division of Angul. It is also celebrated by the Western Odisha diaspora, residing in various parts of the country and foreign lands. The day is arguably the most significant day of the year when one can see and experience the unique culture and tradition of the land, to the fullest extent.

The festival is celebrated by people across socio-economic strata. The agrarian festival marks the harvest of the new rice paddy, in the land where agriculture is the primary occupation. The mountainous terrain of Western Odisha had tribals as its original inhabitants, who relied on hunting and food gathering for their sustenance. As the natives opted for a more settled way of life through farming, the festival served as a celebration that promoted the practice of agriculture.

The preparation for Nuakhai begins well in advance. ‘Safa-sutra’ and ‘Lipa-puchha’ or the cleaning and mopping of the households are carried out by family members. The verandah and mud walls are adorned with ‘Jhuti’ which is akin to the Rangoli design. It is different from the more common Rangoli in being white only and drawn with fingers dipped in soaked rice powder.

New clothes, usually of the traditional Sambalpuri fabric are bought for all family members. It is that day of the year when family members living in different cities and towns make it a point to return to their native place. Villages bustle with activity with friends and acquaintances getting to meet each other after one full year. The members of the extended family, if staying in separate households, gather in their ancestral place.

Early in the day ‘Nabanna’ or the first harvested paddy is offered to the local deity of the region. Devi Samaleswari in Sambalpur, Maa Samaleswari in Balangir, Pataneswari in Patnagarh, Manikeswari in Kalahandi, Sekharbasini in Sundergarh, and Sureswari in Sonepur are offered ‘Nua’ on a predetermined time called ‘Lagna’.

Once the rituals in the temples are accomplished, the celebration now shifts to the individual households. The head of the family, who is usually the eldest family member, offers his prayers and performs the customary rituals. This is followed by distributing ‘Nua’ (rice grains) to every member.

After thanking “Mother Earth” for providing them with food for their sustenance and the Almighty for keeping them together for yet another year, the members consume the rice.

This is followed by ‘Nuakhai Juhar’ where youngsters touch the feet of the elders to seek their blessings. Friends and relatives meet and greet each other with a Nuakhai Juhar, by folding hands. People also throng the temples for the Darshan of the Principal Deity. 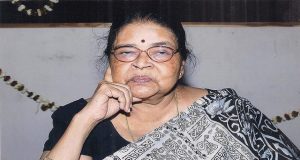