Bhubaneswar: Amid violence in some places of Jajpur district, the third phase of voting for election of Panchayati Raj Institutions (PRIs) has completed in the State on Sunday with 71 per cent polling.

At least 71 percent out of 56.53 lakh voters have turned out to the booths in this phase. However, the polling percentage may go up as the final report is yet to come, State Election Commissioner Aditya Prasad Padhi said.

The polling began at 7 AM and continues till 1 PM. However, in places where voters were seen standing in queue, they were allowed to cast their votes.

The election was held for 171 ZP Member posts at 18,495 booths in 1382 Panchayats in 63 Blocks of 29 districts across the State. The election was also very peacefully conducted at the Maoist hot belt like Mathili & Podia Blocks of Malkangiri district and Phiringia Block of Kandhamal district, Padhi said.

The Commission has strongly condemned the attack on journalists in Binjharpur area of Jajpur district. The DGP and Jajpur district administration have been directed to arrest the culprits and take strong action against them, Padhi informed.

Jajpur Collectors and SP have also assured that all persons involved in the attack will be arrested and strong action will be taken against them.

As per reports, the three journalists of an electronic media house had gone to cover the alleged loot of ballot boxes from two booths at Bachala Panchayat under Binjharpur block when they were brutally assaulted by unidentified miscreants.

Earlier in the day, a delegation of senior journalists met Commissioner Mr.Padhi and apprised him about the incidents of repeated attack on journalists and demanded strong action against the miscreants.

Due to law and order issues, the polling was disturbed in some places. After getting detailed reports from the concerned district collectors, the State Election Commission will examine it and take a decision in this regard, Padhi said.

The State Election Commission has already decided to conduct re-polling at 45 booths, where election was disturbed during the first two phases of polling. The re-polling will be held from 9 AM to 3 PM on February 23 under tight security at the booths.

The police, so far, arrested 62 persons in the district in connection with poll disruption incidents during the first two phases of Panchayat election in the State. 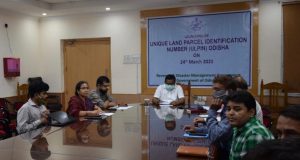 Tathya Correspondent - March 24, 2021 0
Bhubaneswar: Odisha is a pioneer state in the best practices pertaining to land records and was selected for piloting of Unique Land...