Bhubaneswar: Former Minister and four-time BJD MLA Sanjeeb Sahoo along with hundreds of his supporters on Friday joined the BJP here at a function.

“I traveled across my constituency for a month and discussed with various my supporters. All of my supporters have said that they will continue to support me wherever I go. So, as per their suggestion, I joined the BJP today,” Mr.Sahoo said.

The ex-Minister further said that he joined the BJP for overall development of his area.

However, the BJD had not granted a ticket to the veteran leader during the last elections in 2019.

Mr.Sahoo was a Minister of State, Panchayati Raj and Science & Technology from 2006 to 2008.Sahoo also held the position of Minister of State (independent) of School & Mass Education and Commerce & Transport from 2008 to 2009 and from 2009 to 2012, respectively. 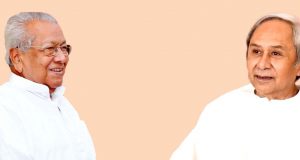 Braja Mishra - February 20, 2021 0
Bhubaneswar: THERE is a state-wide hue and cry over the neighboring Andhra Pradesh holding rural polls in some of the bordering villages...