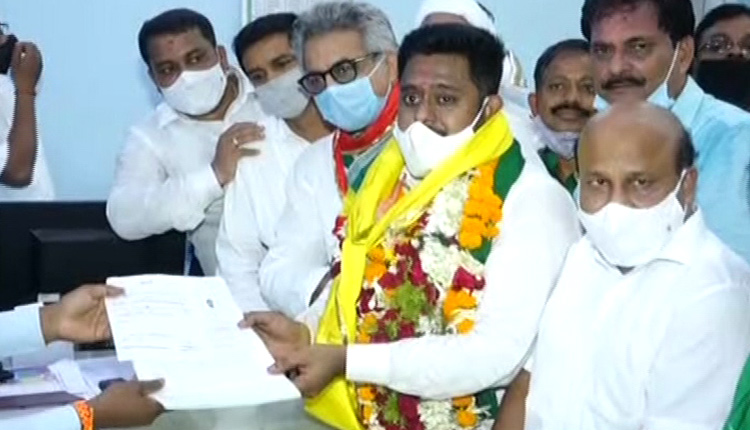 The bye-poll, to be held on 17 April, is necessitated by the death of Rudrapratap’s father Pradeep Maharathy in October 2020. He had represented Pipili in the Assembly seven times.

Accompanied by senior leaders and hundreds of supporters, Rudrapratap Maharathy filed his nomination papers in the Additional District Magistrate’s office in Puri.

Rudrapratap and his sister Pallavi broke into tears before starting for Puri from Pipili.

“My father had always been there for the people of Pipili. I will follow his footsteps and serve them. I am optimistic that people will bless me in the by-poll,” Rudrapratap said.

He was accompanied by OPCC President Niranjan Patnaik and other senior leaders of the party, besides a large number of supporters.

“The Congress workers are excited about the upcoming election. It is going to be a good fight,” Mr.Mangaraj said.

BJP nominee Ashrit Pattnayak has already filed his nomination papers for the by-election.

While polling will be held on 17 April, votes will be counted on 2 May.

Actors-turned-politicians Sritam Das, Pinky Pradhan and Anu Choudhary have been named in the list.

Governing BJD, which is trying to retain the seat, has entrusted the responsibility of campaigning in the constituency’s all panchayats to senior leaders, MLAs and leaders of Biju Chhatra Janata Dal, Biju Mahila Janata Dal.

BJP Walks Out Of All Party Meet