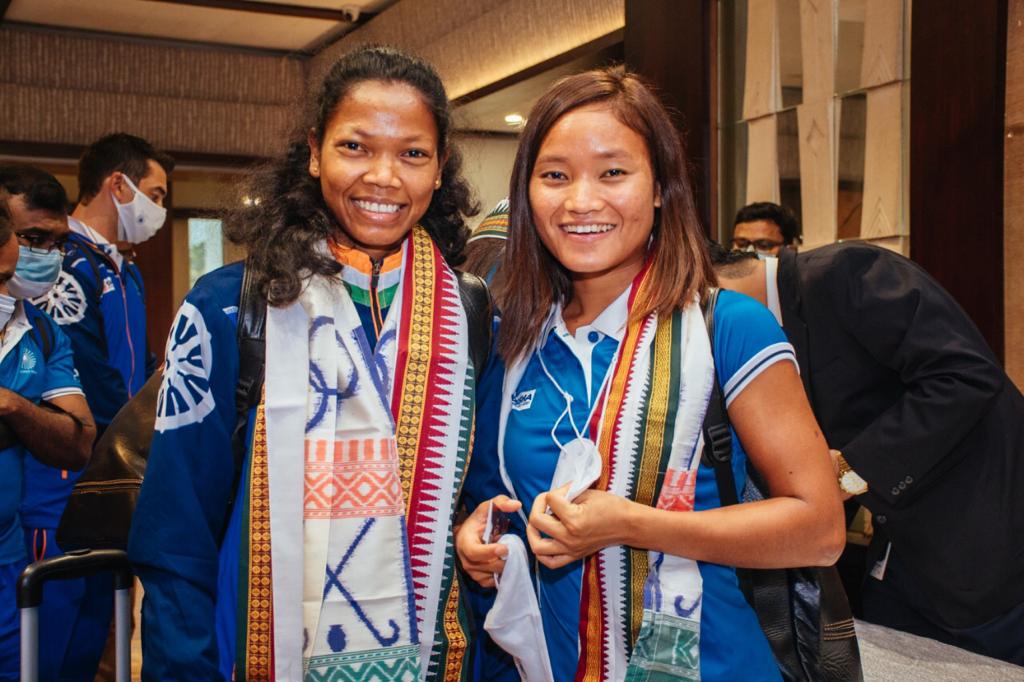 Bhubaneswar:  Indian Hockey Men’s and Women’s teams were given a rousing welcome as they arrived here on Tuesday.

Amid beats of dhol, traditional dance and cheers, the hockey teams were given a grand welcome at the Biju Patnaik International airport by the sponsoring State. After reaching at the airport, the hockey players were driven to a hotel in the city under a tight security.

The State Government will felicitate the Tokyo Olympics stars today during a special programme. The state government has been the sponsor of both teams since 2018.

Welcoming the teams, CMO in a tweet said, “#Odisha welcomes members of the Indian Men’s and Women’s Hockey teams to the State upon their return from the historic #Tokyo2020 campaign.”

Sports Minister Mr.Behera said, “Welcome Back team India!! After spectacular performances by the @TheHockeyIndia teams in the #TokyoOlympics2020, they have been invited today with all hearts to #Bhubaneswar for the facilitation ceremony organised by the Government of Odisha.”

Both the teams will be felicitated by the Odisha Government at the Kalinga Stadium in Bhubaneswar today.
They will also be felicitated by Chief Minister Naveen Patnaik at the Convention Centre, Lokaseva Bhavan.

At the Tokyo Olympics, the Indian men’s hockey team won the bronze medal after a gap of 41 years while the women’s team entered into semi-final.

As per its earlier announcement, the State Government has given cash awards of Rs 2.5 crore along with DSP rank posting to each of Birendra Lakra and Amit Rohidas.

Deep Grace Ekka and Namita Toppo, who were part of the Indian women’s team, have been given Rs 50 lakh each. All four players are belong to Odisha.