Bhubaneswar: Following the demand for change of guard in State Congress by several party leaders, Pradesh Congress Committee (PCC) President Niranjan Patnaik on Thursday said he is ready to quit from his position, whenever party high command asks for.

After the poor performance of the party in the recently held Panchayat and Urban Polls, a section of State Congress leaders including few MLAs want a change of guard in the Pradesh Congress Committee (PCC) much ahead of the 2024 general elections for Lok Sabha and State Assembly.

“No one can stay as PCC President permanently. Changing the leadership of PCC usually occurs every two-three years. However, it’s an interim matter of the party and I am ready to quit as the President of the State unit whenever AICC wants,” Mr.Patnaik told reporters here.

When asked whether he had sent a resignation letter to the party leadership, the Congress leader said, “I had offered to resign from my post in 2019. But, AICC wanted me to lead the party in the State.” Sources said that Mr.Patnaik has sent several letters to AICC Chief, however he was allowed to continue.

There are many eligible leaders in the State Congress to replace him, he said, adding that he will extend his full cooperation to the new PCC President as he is not going to switch over the party.

Of the nine Congress MLAs in the State, Taraprasad Bahinipati, Santosh Singh Saluja, Adhiraj Panigrahi and Mohammed Moqium have expressed concern over the party’s present and future situation seeking certain changes in the leadership though all of them claimed that they are not opposed to the existing PCC President Niranjan Patnaik.

“We are not opposed to Niranjan Patnaik, but the party must survive and all agree that the organisation should come out of the present situation. An alternative leadership should be installed which could pull out the party, Mr.Panigrahi, a lawmaker from Khariar has said recently.

Congress which ruled Odisha for decades till Naveen Patnaik’s BJD government was installed in 2000, however, was pushed to third place in state politics after the 2019 elections. The BJP replaced Congress as the state’s main opposition party.

In the urban polls, Congress could secure only 12 per cent of the vote and won only 7 Chairperson seats as against its previous performance of 13 seats in 2013-14 polls. The BJP on the other hand secured 16 Chairperson seats while the ruling Biju Janata Dal gained 73 seats along with three Mayors in Municipal Corporations of Bhubaneswar, Cuttack and Berhampur.

What has come as a shock for the OPCC is that all its candidates failed to open accounts in the Bhubaneswar Municipal Corporation election while its mayor candidate lost the deposit.

In all the by-elections held since 2019, the Congress candidates have lost their deposits in all places except at Tirtol. 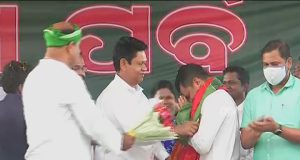