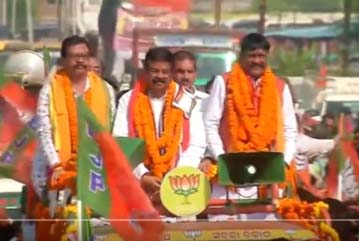 Padampur: In a major political action, the BJP candidate for Padampur by-poll, Pradip Purohit on Monday returned from the premises of the office of the Returning Officer without filing his nomination papers for the election.

Mr.Purohit along with Mishra and Pujari met agitating farmers in the premises of the office of Returning Officer, Padampur while going to file the nomination this afternoon.

The farmers have requested the BJP leaders not to file nominations until their demand for release of claims under Pradhan Mantri Fasal Bima Yojana (PMFBY) has not met. However, in a political drama, the BJP leaders have decided to go back without filing the papers.

“In support of the demand of farmers’ association, we have not filed nomination today. We have discussed with the farmers that if somebody else files the nomination, we will also file the papers,” Mr.Mishra said.

The farmers have requested all the political parties not to take part in the by-election until their demands have not been fulfilled.

On the other hand, the Governing BJD has already backed the demand for the district status to Padampur sub division.

A local outfit named as Padampur Proposed District Central Action Committee staged a demonstration on Monday outside the office of Sub-collector to press for their demand.

Yesterday, Finance Minister Niranjan Pujari and Bhatli MLA Sushant Singh met Chief Minister Naveen Patnaik and held a discussion on the issue. After the discussion, the BJD has announced that they are backing the demand for formation of a separate District.

However, the agitating leaders demand that the Chief Minister should make an announcement on the formation of Padampur district.

Political pundits have the opinion that the Padampur by-election will be fought on local issues so the two major political parties BJD and BJP have stood with two important local demands to woo the voters.

The bypoll has been necessitated after the demise of sitting BJD MLA Bijay Ranjan Singh Bariha in October.

As per the schedule, the candidates can file their nomination papers till November 17. The last date for withdrawal of candidature is November 21, while the votes will be counted on December 8.

Tathya Correspondent - August 23, 2021 0
Bhubaneswar: Governing BJD on Monday alleged that lakhs of farmers in Odisha are suffering due to the non-settlement of their claims under...