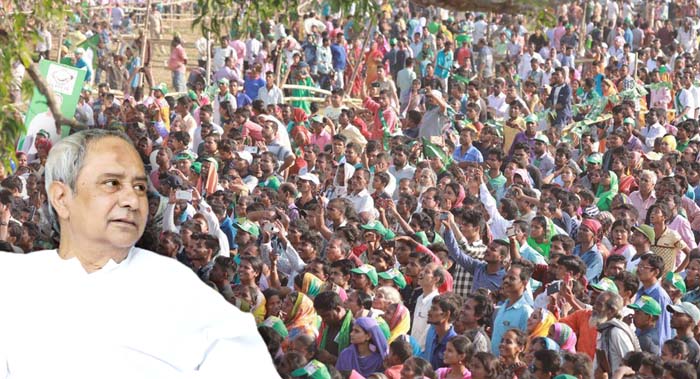 Bhubaneswar: About 18 months after the general elections, Odisha Politics has started to take a new turn with the Governing Biju Janata Dal (BJD) President Naveen Patnaik realizing that he can little afford to continue his party’s friendship with the national level political parties.

Naveen, who has occupied the Chief Minister’s post for five consecutive terms, has also realized that BJD’s existence and identity as a regional party, is at the stake as the relationship with the BJP strengthens. The regional outfit sees no better alternative than to hark back to its earlier policy of “Equal Distance” from national parties like BJP and Congress, in order to show that it really means business and is ready to fight against discrimination by the national parties towards Odisha.

Naveen, while addressing the youths of his party, has given a clear message to the people of Odisha, that his party would no longer tolerate indifference towards the causes of the state.

The regional party during the last 18 months after the general elections, has been supporting all the bills, policies and programs of BJP led Government at Centre. In the process, the people have started tilting towards BJP, which is clearly evident from the rise in the vote share of the saffron party in Odisha.

When Naveen extended a friendly hand towards BJP expecting better results for the State, it was not expected that it will boomerang on the regional party. Now it is felt that as a regional outfit, the BJD needs to return to its base while keeping the BJP at bay.

With the grand old party – Congress, gradually losing its base across the state, BJP is making aggressive inroads in the state. In the process BJP is getting strengthened at the cost of Congress even as there is no loss for the BJD. The speed, in which the Congress has been losing its base, may further strengthen the BJP. The regional party wants no national party should be close to its position.

When Naveen went on extending BJD’s support on all issues to the BJP-led NDA Government after the 2019 elections, the general impression was that the regional party and the rightist saffron party were not unequal. The Congress meanwhile has been harping on the “Two sides of one coin” barb for BJD and the BJP.

The regional party has meanwhile increased its strength to more than one crore people as members. In other words, there is one BJD member in every 4.5 people. BJD’s cadres are mostly young and women, are highly spirited and slowly getting frustrated as they are not getting scope to oppose BJP on any anti-people issue. Now the BJD’s first priority is to keep these massive human resources mobilized to strengthen the party.

But why Naveen suddenly realized that friendship with national parties like BJP could be fatal for BJD? The reason is obvious. BJP with which Naveen wanted to make friendship, is not exactly the same party of 90’s and now the saffron party means ‘political business’ before entering into friendship.

Though the Odisha Chief Minister supported all the policies of Prime Minister Narendra Modi and even gifted a Rajya Sabha seat to the BJP, similar reciprocation is now missing.

This was made clear after the maiden visit of BJP’s newly appointed Odisha in charge D Purendeswari. She has hit the BJD where it hurts most. Purandeswari also raised questions on Naveen’s governance during the non-election period indicating that BJP would gear up its anti-BJD stands in the days to come.

These words of hers were enough for Naveen to end friendship, which of late became irksome for the masses.  The saffron party has almost dragged the BJD to the streets when the BJP supporters publicly agitated on issues like Nayagarh child murder case, Bagala Dharmasala issue and Jajpur’s Smitarani murder case.

This is not all, the BJP supporters also burnt effigies of Naveen in the heart of the state capital which apparently hurt the BJD leaders who continued to remain silent on different issues. The Congress, on the hand, supported the BJD in the Assembly while the BJP members demanded dismissal of a minister in the Pari murder case.

Naveen did not hesitate to explain to the people of Odisha the true character of national parties and their leaders in Odisha.

“What is the primary objective of the state leadership of a national party? They have to basically impress the national leadership so that they can get crucial posts or become ministers,” the BJD Supremo said.

Going back to history, Naveen said the national parties always have a mainstreaming agenda. It is only through mainstreaming that they can get maximum votes to form a government at the centre. Therefore, the national parties’ strategy revolves around uniform language (Hindi), uniform culture and uniform policies which will appeal to the large populous states and then impose the same across the country ignoring the unique identity of certain population.

While highlighting the significance of the regional parties, Naveen said the national parties are bound to “compromise” on the distinctive requirements of a state for gains in the larger national context. The state leaders of national parties have no voice in Delhi Durbar to protect the interest of Odisha.

Instead, Naveen said: “We don’t have any bosses in Delhi. The BJD will continue to fight for the state’s rights.” He also raised the BJD’s most popular demand like special category status for Odisha. Both the national parties — BJP and Congress — had kept special category status as their number one manifesto point. “However, after elections every time they conveniently forgot it, he reminded the people of Odisha.

Looking at the approach of BJD Supremo, it appears as if the regional outfit will mobilize its ‘sea’ of human resources of more than one crore members to consolidate its position in a more vigorous way, for which these forces were eagerly waiting after their induction to the BJD. Political observers feel that road map will be clear on 20-21 December, when regional outfit’s Executive Body and State Council meeting will be held. Lot of political actions are on cards in 2021, as politics is about to turn over a new leaf, the observers feel.

Chadha Gets AS Rank

Tathya Correspondent - January 17, 2023 0
Bhubaneswar: Ace Administrator Sanjeev Kumar Chadha has been empanelled in the rank of Additional Secretary (AS) in Government of India.