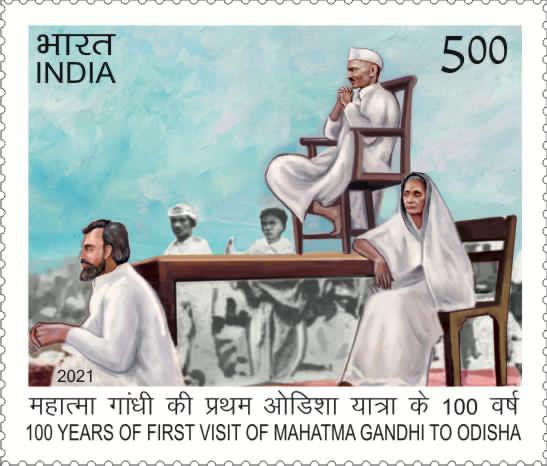 Bhubaneswar: Odisha Legislative Assembly Tuesday unanimously passed a resolution seeking incorporation of the word “Ahimsa” (non-violence) in the Preamble of the Indian Constitution.

Leader of the House Naveen Patnaik moved the resolution while the Assembly conducted a special discussion on Mahatma Gandhi who had visited Odisha exactly 100 years from today.

The leaders cutting across party lines made a queue to offer floral tribute at the Gandhiji’s statue in the Assembly premises amidst chanting of ‘Ram Dhoon’ before beginning of the discussion.

The special discussion in the House coincided with the statewide celebration of the 100 years of Mahatma’s visit to Odisha. Passing of the resolution on incorporating the Ahimsa in the Preamble of the Constitution, is considered a fitting tribute to Gandhiji, leaders said.

Stating that Odisha had a special place in the heart of Mahatma Gandhi, the Chief Minister said the Father of the Nation had visited the state eight times. “I am glad that this August House, is commemorating the 100th anniversary of Gandhi’s first visit to Odisha on 23rd March, 1921,” he said.

Mr.Patnaik said during his visits to Odisha, Mahatma Gandhi had extensively travelled in different parts of the State and interacted with cross sections of the people.

He took many Pada Jatras through which he became very close to the hearts of people of Odisha. His visits created greater awareness about various social issues apart from energizing the Freedom Movement.

Of all the things that this country has given the world, Gandhiji’s philosophy and his message stands out as one of its greatest contributions. These are no ordinary times. As we battle the pandemic, one can’t help but reflect on the collective nature of this challenge we face, he said.

“The world has been strongly reminded that no bubbles of wealth and growth matter if large sections of the population live in poverty and vulnerability. We are all connected, and the Mahatma’s life and its message is more important than ever. His emphasis on the shunning of individual greed and his exhortation to think of the community is the reminder that the world needs,” Mr.Patnaik said.

Noting that there is also an increasing polarization and divisiveness globally, Mr.Patnaik said Gandhi’s commitment to pluralism and his message of tolerance and harmony is as relevant now as it was then. The Mahatma’s non-violent resistance is a spark that ignited peaceful movement around the world, he pointed out.

And what better place to remember this eternal idea than on this land, the Land of Kalinga, that inspired the repudiation of war by Ashoka two millennium ago, the Chief Minister asked.

Recalling Martin Luther King Jr., Mr.Patnaik said, he had once said. “If Humanity is to progress, Gandhi is inescapable… We may ignore at own risk”.

Claiming that the BJD Government in Odisha is totally committed to the principles and ideals of Mahatma Gandhi, Mr.Patnaik said renaming the State Secretariat as “Loka Seba Bhawan” was not a symbolism. It is our Article of Faith. As this August House pays its tributes to Mahatma, with a sense of gratitude, let me conclude by reminding ourselves of the Talisman, Gandhiji gave to us, he said.

“I will give you a talisman. Whenever you are in doubt, or when the self becomes too much with you, apply the following test. Recall the face of the poorest and the weakest man whom you may have seen and ask yourself, if the step you contemplate is going to be of any use to him. Will he gain anything by it? Will it restore him to a control over his own life and destiny? In other words, will it lead to Swaraj for the hungry and spiritually starving millions?”, Mr.Patnaik quoted Gandhiji saying.

Leader of Opposition in the Assembly, Pradipta K Naik of BJP, however,  said tributes to the Mahatma can only be reflected in how much we all have lived up to inculcate his doctrines in our lives.

Congress Legislature Party Leader Narasingha Mishra, also welcomed the resolution. “Gandhiji was a great worshiper of non-violence. His ideology should be part of the Constitution,” he said.

Government Chief Whip Pramila Mallick said Gandhji was stressing on women empowerment and against casteism. He was dedicated to the prevalence of unity among Indians despite diversity.

Congress Chief Whip Taraprasad Bahinipati said it would be a fitting tribute to Gandhiji, if the State Government declares total prohibition in Odisha.

Speaker Surjay N Patro said: “Gandhiji was all along working to reduce differences among religions. Therefore, ‘Raghupati Raghava Rajaram’ song was his favorite. Satyagraha, Quit India Movement, discarding foreign goods are some among his great contributions to the country apart from the mantra of Ahimsa.”