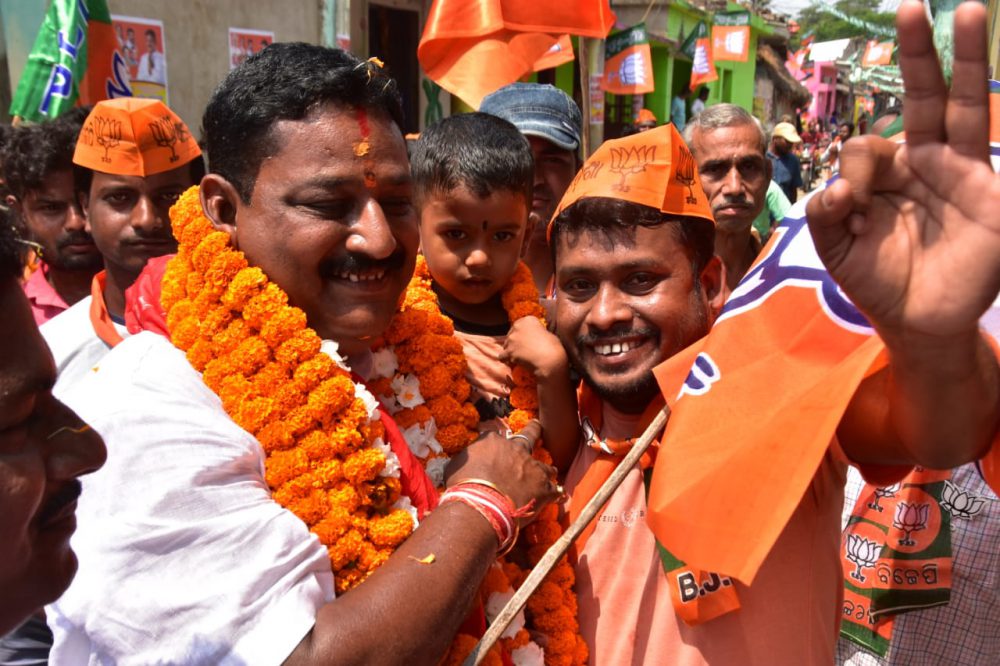 Bhubaneswar: The outcome of the ensuing bye-elections in the Pipili assembly segment on 17 April will have little impact on Odisha’s political arithmetic. This is because the governing BJD’s strength in Assembly will go up to 114 if Rudrapratap Maharathy wins, and if BJP candidate wins, its strength will increase to 23 as it has been after the 2019 general elections.

Even if Congress candidate Ajit Mangaraj, who has been campaigning from isolation following testing positive to the COVID-19, wins the bypoll results will have no significant changes. The Congress presently has only nine members in the Assembly, and the party lost its principal opposition status to the BJP. Winning a single seat will also not help Congress to regain its leading opposition status.

Similarly, the results of the Pipili bypoll will have no such impact on the political calculations. However, the Pipili result is politically significant for both the BJD and the BJP. This is because the 17 April bypoll result will re-establish whether the saffron party has made any growth in the state’s coastal region, considered a fort of the Biju Janata Dal.

The BJD has already won two previous by-elections in Balasore and Tirtol in the coastal zone. While Naveen’s party candidate snatched the Balasore seat from BJP, the regional party retained its seat in Tirtol. Pipili by-poll is the only recent opportunity for the BJP to overcome its loss in Balasore.

The BJP is not that weak in Puri district, where its candidates – Jayant Sarangi and Lalitendu B Mohapatra – defeated BJD stalwarts like Maheswar Mohanty and Sanjay Dasburma, respectively, in the 2019 general elections. This apart, BJP’s Lok Sabha candidate Sambit Patra also performed strongly in 2019 despite losing.

The saffron party has repeated Ashrit Pattnayak as its candidate in the Pipili segment from where he lost the polls in 2019. However, Pattnayak had polled 78,731 votes (41.62%), while BJD veteran Pradeep Maharathy won by securing 88,518 votes (50.66%). The difference of votes between Maharathy and Pattnayak is less than 10 per cent. Now the bypoll is held in Pipili due to the demise of Pradeep Maharathy, a seven-time MLA.

Under the changed circumstances, Pattnayak is pitted against Maharathy’s son Rudrapratap, who is new to the electoral procedures. Though Junior Maharathy claims to have experience of managing the polls, he appeared to be facing a tough fight. However, veteran BJD leaders like Debi Prasad Mishra, Maheswar Mohanty, Sanjay Dasburma, Samir Dash and others have come to the rescue of Junior Maharathy and prepared the strategy for the party candidate.

Above all, Chief Minister Naveen Patnaik will also campaign for Rudrapratap, possibly in virtual mode. Naveen craze among the people of Odisha will undoubtedly boost the prospects of the BJD candidate. This apart, his late father’s vast network across the assembly segment and old contact will also help Rudrapratap. However, the BJD candidate has to carry the anti-incumbency burden because Pradeep Maharathy had represented Pipili in Assembly seven times without any remarkable development in the area even though it is located just 25 kilometres from the state capital.

The rural Pipili still has many kutcha houses, lacks safe drinking water facilities and other amenities that have already been provided to poor and remote regions of Odisha. The health care system in Pipili has absolutely no meaning as the people still depend on the Capital Hospital due to doctors’ absence in rural pockets. It is challenging for the poor people of Pipili to hire a vehicle and attend a hospital in Bhubaneswar.

The waterlogging and lack of proper irrigation facilities still hunt the Pipili area. Simultaneously, the people are aggrieved over not getting an adequate rehabilitation package after the Cyclone Fani, which struck the constituency in 2019. The State Government has in one way failed to meet the aspirations of the people of Pipili.

However, the BJD people are optimistic as Pradeep Maharathy was a veteran in his constituency having contacts over different categories of the people. Pipili segment’s votes comprise 23.4 per cent of scheduled caste and 20.5 per cent of the scheduled tribe people. This apart, the members of the Mission Shakti will also play a decisive role in Pipili bye-polls.

Ashrit Pattnayak, on the other hand, has the experience and maturity in comparison to the BJD candidate. The BJP has sizable followers in Pipili, which is evident from the fact that Pattnayak in 2019 polls secured 78,731 votes. Therefore, it is considered a tough fight between the BJD and BJP, old and new, matured and youth.

Pipili, across India, is known to harness appliqué work artisans. However, several are now marred with the losses incurred due to COVID-19, lockdown, and low demands due to the pandemic. They also face lesser demands after the National Highway passing through their area was diverted from other places, leading to lesser arrival of tourists.

The BJD leaders have made it an issue and blamed the BJP for diverting the National Highway, bypassing the appliqué artists and their flourishing trade. Several deserving artists from the area do not possess the ID card of handicraft workers issued by the government. This card otherwise facilitates easy entry of artisans into government exhibitions without fees and makes them eligible for several loans.

Several artisans said that due to the lack of awareness and apathy of their masters, they are still deprived of these cards. Several nearby villages like Darjisahi and Mukundpur near Pipili host many godowns, and artisans are involved full time to sell these lucrative artworks. This artisans’ problem is now snowballing to be a significant issue in Pipili bypoll. They blame both BJP and BJD for not coming to their rescue.

Braja Mishra - March 26, 2022 0
Bhubaneswar: The hottest topic being discussed in the political circle now is whether the ruling Biju Janata Dal (BJD) supremo and Chief...