New Delhi: The Union Government on Wednesday hiked the Minimum Support Price (MSP) for paddy by Rs 100 per quintal for 2022-23 crop year in order to encourage farmers to bring more area under the crop and boost their income.

The Cabinet Committee on Economic Affairs (CCEA), chaired by Prime Minister Narendra Modi, approved the increase in MSPs for all 14 kharif (summer) crops for the 2022-23 crop year.

Paddy is the main kharif crop, the sowing of which has already begun and the Met Department has projected a normal monsoon for the June-September period.

“Government has increased the MSP of kharif crops for 2022-23, to ensure remunerative prices to the growers for their produce and to encourage crop diversification,” an official statement said.

Announcing the MSP hike before the sowing of kharif crops will give farmers an indication about the price which they would get and help them in deciding which crops to grow, he added.

As per the CCEA decision, the MSP of 14 kharif crops has been increased in the range of Rs 92-523 per quintal.

Notably, the Odisha Government has been demanding before the Centre to enhance the paddy MSP to Rs 2930 per quintal.

If the State Government demand is accepted, it will help farmers earn 25 per cent profit from their produce. Odisha is the fourth largest rice producing state in the country. 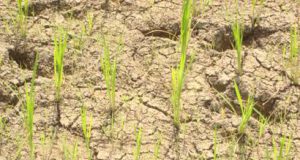 Tathya Correspondent - August 31, 2021 0
Bhubaneswar: The agricultural activities are likely to be affected in 213 out of 314 Blocks of Odisha as those area received deficit...