Addressing booth-level party workers at Janata Maidan here, Nadda said BJP is the biggest political party in the world with a strength of 18 crore. “We are an ideology-based national party. For us, it is always nation first, but keeping in mind the regional aspirations,” he said.

“We are fighting dynasty-based parties. Abdullahs & Muftis in Jammu & Kashmir, Chautalas in Haryana, Badals in Punjab, Samajwadi Party in UP, Yadav in Bihar, Soren in Jharkhand….In Odisha it is one man party… We are fighting parties run by families (sic),” he said.

Dynastic politics is also prevalent in Odisha with the presence of Biju Patnaik’s party, said the BJP President.

He further the first tribal President Droupadi Murmu is from Odisha and more than 15 from the state have been conferred with Padma awards. “This was never the case during the UPA government and shows PM Modi’s immense love for the state,” he added.

“This Government (Odisha Government) is a level putting government. PM Awas Yojana is being branded as Biju Pucca Ghar Yojana. While 50 crore people have been included under the Ayushman Bharat Yojana, 60 lakh people in Odisha are deprived of it.”

The Centre has allocated Rs 15,490 crore to Odisha under MGNREGA and fake bills are being made here. Similarly, crores of rupees are being spent under Jal Jeevan Mission (JJM). However, tribal women are going to ponds and wells to get drinking water in the state. It shows that the State Government in the state is riddled with corruption. the BJP chief said.

He said that protectors have become perpetrators in Odisha. “The Governance of the State, where 3 Ministers are accused of murder, can easily be guessed,” he said.

Mr.Nadda further said that even Ratna Bhandar of Lord Jagannath is not safe in Odisha. “Ratna Bhandar’s key was missing and later a duplicate key was found. Uproot this type of ‘duplicate’ government and bring BJP to power in Odisha,” he exhorted the gathering at Janata Maidan here.

He said that protectors have become perpetrators in Odisha. “The Governance of the state, where 3 ministers are accused of murder, can easily be guessed,” he said.

“Modi government has completely changed India’s picture in the world in just eight years. In Odisha, the government which has been here for 20 years, is failed to ensure ambulance service for pregnant women in remote areas,” the BJP leader said.

It’s time to uproot this government and bring a double-engine Sarkar for massive development, Nadda told the party workers.

Notably, BJP National President JP Nadda is on a two-day visit to the state. This is his first visit to Odisha after being appointed as BJP chief. 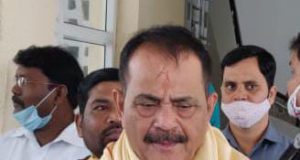