Bhubaneswar: Even though the Ayushman Bharat has not yet been implemented in Odisha, 28 hospitals of the State have been empanelled under the Central scheme.

This was informed by Union Minister of State (MoS) for Health, Bharati Pravin Pawar in Lok Sabha on Friday.

In a written reply to a question, Pawar said 24 Government and two private hospitals of Odisha have been empanelled under the Ayushman Bharat Pradhan Mantri Jan Arogya Yojana (AB-PMJAY) to facilitate beneficiaries avail treatment under the portability feature of the scheme.

AB-PMJAY is implemented in all States and UTs barring West Bengal, NCT of Delhi and Odisha.

The scheme is implemented across the country through a three-tier model. National Health Authority, an attached office of the Ministry of Health and Family Welfare with full functional autonomy, is the apex body implementing AB-PMJAY across the country, she said.

The Union Minister further stated that AB-PMJAY is completely funded by the Government and costs are shared between Central and State Governments in the ratio as per the extant directives issued by the Ministry of Finance.

Notably, the BJD Government has not implemented the scheme as it has come up with its own health assurance scheme Biju Swasthya Kalyan Yojana (BSKY).

AB-PMJAY provides health assurance of up to Rs.5 lakh per family per year for secondary and tertiary healthcare hospitalizations.

On the other hand, every family enrolled under Biju Swasthya Kalyan Yojana is eligible for Rs 5 lakh from the state government, while women get cover of Rs 10 lakh under this scheme. 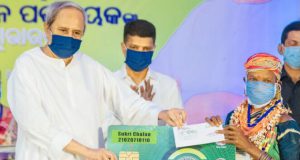