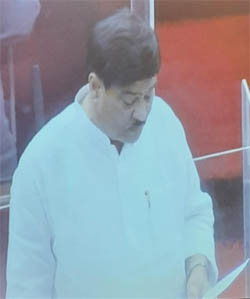 Bhubaneswar: Odisha Government  has blamed it on the Centre accusing it of imposing excess taxes leading to price hike leading to increase of price of edible oil by over 60 Percent.

State Legislative Assembly discussed the issue when the opposition Congress blamed both the State and the Union Government for putting common man in trouble by raising the price of edible oil during a pandemic situation when the people are finding it difficult to met both the ends.

He said while the price of a liter of Palmolive oil was Rs 80 in October, it has now been sold at the price of Rs 126, mustard oil price increased from Rs 100 to Rs 150.

He said that the edible oil price increased as the Centre has imposed 5.5% GST, 17.5% agriculture cess and 21% import duty on the edible oil.

Noting that Odisha is a consuming state, the Minister said: “The State Government has no role in the regulation of the edible oil price as this is the entire lookout of the Centre.”

This apart, the Minister said the price of mustard oil was raised because the centre hiked the MSP of mustard oil seed by Rs 200 a quintal. He said the state government has taken up several measures to check black marketing and adulteration of the edible oil in Odisha.

The Opposition Congress, which moved the notice for an adjournment discussion on the issue, however, said that the state government and central government have no concern for the common man.

“The common man is suffering due to skyrocketing price of edible oil which is an essential ingredient of the daily dishes,” said Congress Chief Whip Taraprasad Bahinipati. He was critical over the central government’s taxes on the edible oil.

The state government should take steps to raise domestic production of edible oil in the state, said Mr.Bahinipati adding that there is rise in the price of fuel, cooking gas and now edible oil.

The mustard production has been reduced by 50 percent in Odisha due to lack of patronage from the state government.

The BJP leader said the State Government cannot escape from the responsibilities just by blaming the Centre on every issues. Majhi said the state has failed to implement the central government programmes to increase oil seed production in Odisha.

Government Chief Whip Pramila Mallick admitted that there has been reduction in the oil seed production in the state. She, however, claimed that the State Government has taken several measures to curb black marketing and adulteration of edible oil.