Tata Steel Long Products emerged as the highest bidder with Rs 12,100 crore for the acquisition of the 93.71 per cent equity stake of NINL.

NINL is a joint venture of 4 CPSEs, namely MMTC, NMDC, BHEL, MECON and two Odisha Government PSUs, namely OMC and IPICOL. The State Government companies OMC & IPICOL having a total stake of 32.47% were also part of the decision-making at every stage.

NINL has an integrated steel plant with a capacity of 1.1 MT, at Kalinganagar, Odisha. The company has been running in huge losses and the plant has been closed since March 30, 2020.

Among the three players, TSLP emerged as H-1 bidder, whose bid has been accepted by the AM. Letter of Intent (LoI) is being issued to TSLP inviting them to sign the SPA. At this stage, 10% of the bid amount shall be paid by the successful bidder into the Escrow account.

On the closure date, shares will be transferred to the strategic buyer and the balance amount will be received to be utilized in the manner prescribed in the waterfall agreement October 27, 2021 signed amongst the selling shareholders. 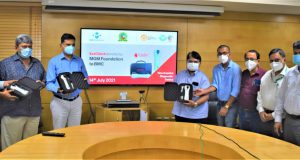