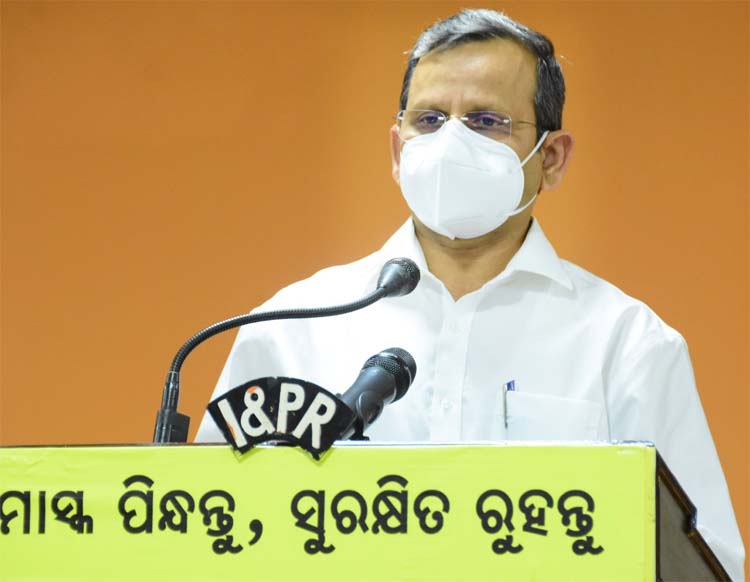 Bhubaneswar: In view the hike on COVID-19  graph during the second wave of the COVID-19 pandemic, Odisha Government Thursday decided to impose night curfew in all the urban centers across the state besides weekend shutdowns in 10 districts bordering Chhattisgarh from Saturday.

This was announced by Chief Secretary Suresh Chandra Mohapatra, who said that the corona graph continues to grow since a fortnight despite imposing several measures like night curfew in 10 bordering districts, mandatory RT-PCR negative report for entry into the state, strict enforcement of compulsory mask wearing and maintaining social distancing.

Therefore, he said, the government has decided to impose night curfew from 9 pm tm to 5 am in urban areas in 20 other districts while the night curfew tiing has been changed from 10 pm to 60 in 10 bordering districts to 6 pm to 5 am.

While there will be no night curfew in rural pockets of the 20 other districts, it will remain in force from 6 pm to 5 am in village areas of 10 bordering districts.

Mohapatra said that emergency services including water supply, health care and others will be exempted during the imposition of night curfew. No passes will be issued but the employees need to carry their identity cards while travelling during the night curfew.

The night curfew has been clamped to restrict the movement of people and no restriction on movement of goods and good carrying vehicles within the State and outside, Mohapatra added.

Stating that the restrictions to be imposed from Saturday will help in checking spread of infection among the masses, the Chief Secretary said the government has already announced postponement of all board examinations including Matriculation examinations for standard 10 students and Plus-II examination for the class 12 students.

While totally banning mass congregations like political, social, cultural and other events, the chief secretary said the authorities of district administration and municipal corporations, may issue orders for their respective jurisdictions, under appropriate provisions of law, such as under section 144 of CrPC, and ensure strict compliance of the COVID-19 protocols in the state.

However, during the night curfew, restrictions shall not apply to the essential services, he said adding that all schools and hostels across the state will remain closed from April 19 (Monday). He said there will be separate notification for the technical institutions operating in the state.

Asking people to strictly follow mandatory mask wearing and marinating social districting, the chief secretary said the shop owners who violates the norms will face strict actions like sealing of the shops.

Meanwhile, the state government has appointed 21 senior IAS officers as COVID  Observers of various districts. The General Administration and  Public Grievance Department today issued an official order in this regard.

Among the officials, Anu Garg and N Thirumala Naik will serve as COVID Observers of the capital city.  Besides, Nikunja  Bihari Dhal has been appointed for hotspot districts like Jharsuguda and Sundargarh.

The issues regarding functionalization of Covid Care Centers, enforcement of the Covid appropriate behaviour, dispersing of the markets places,  imposition of night shutdown in urban areas, weekend shutdown in urban areas of  bordering districts, increasing the testing and isolation, monitoring of home isolation, micro-management plans in different districts, closure of schools, Colleges and coaching institutions and other matters.

The Chief Secretary directed the Collectors to increase the number of rapid response teams for monitoring the home isolation cases; and, allot a small area to each team for intensive monitoring. The teams should also work for testing, contact tracing.

Mr.Mahapatra made it clear that the district administration should now singularly focus on containment of the spread of the infection. Collector can engage any employee from any department in Covid duty as per the disaster management act. All Government employees will be under the complete control of the Collectors of the respective districts. The CDMOs and medical officers were asked to follow the SOPs judiciously for admission into and discharge from Covid hospitals.

Further, Mr.Mhapatra asked the Collectors to involve the PRI institutions and village communities activity in containment of the virus in their respective areas.