Bhubaneswar: Hemant Sharma, Principal Secretary Industries said that the State Government is all set to modify the Industrial Policy Resolution (IPR) to make things easier for investors in Odisha.

Principal Secretary Industries Mr.Sharma while addressing the Executive Committee meeting of the Utkal Chamber of Commerce & Industry (UCCI), here on FridayasChief Guest said Odisha Government under the leadership of Chief Minister Naveen Patnaik is determined to improve Ease of Doing Business in Odisha and make things much easier for investors.

Mr.Sharma further said that the State Government is simplifying various processes so as to attract more investment in large sector which will help entrepreneurs of the State to come forward for more MSME units and create a proper ecosystem thus giving a stimulus to the industrialization of the State which is on the fast track now.

Congratulating the newly elected office-bearers of the UCCI, Mr.Sharma assured of all support of the Department of Industry.

IPICOL Managing Director Nitin B Jawale, who graced the occasion as Guest of honour, informed that the recent recognition given to Odisha at National level could be possible due to various policy measures adopted by the State Government resulting in investors showing interest in investing in Odisha.

He assured to have frequent interface with the UCCI and take forward the synergy so created with today’s function attended by members of large industries, MSMEs, trade, commerce and services.

Director Industries Md.Sadique Alam offered timely redressal of any issues that would be brought to his notice.

The outgoing President of UCCI, Ramesh Mohapatra was felicitated on the occasion and a standing ovation was accorded to him by the full house for his yeomen service to the UCCI for almost a decade.

Brahma Mishra, the newly elected President of the UCCI, sought cooperation of all the EC members and members of UCCI to make the organization a vibrant one.

He also committed to take care of the requirement of all the stakeholders and to take the issues of all sectors to proper authorities. 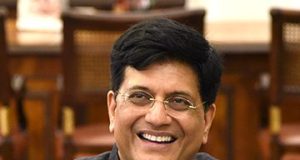 Tathya Correspondent - April 12, 2022 0
New Delhi: India achieved yet another milestone in context of IP innovation ecosystem, wherein for the first time in the last 11...