Bhubaneswar: Of late Odisha has been witnessing a unique situation where the elected peoples’ representatives and the public servant face off, giving a wrong signal for the society as well for the smooth governance in the state. At least three MLAs and an MP have recently hit the headlines for assaulting the officials. The incidents have come to the fore and people in the administration are worried over the development because for good governance a cordial relationship between the two is needed.

Questions are raised as to why such incidents take place in Odisha. This was not seen during earlier terms of Chief Minister Naveen Patnaik. Other than Chilika MLA Prashant Jagdev, no other lawmaker was in the news before 2019 for wrong reasons. It was Patnagarh’s BJD MLA Saroj Meher, who came to the news immediately after the 2019 elections and even before taking oath as a Member of the Odisha Legislative Assembly. Meher had allegedly assaulted an engineer over the bad condition of a road. The incident had sparked uproar in the state’s administrative circle.

However, Prashant Jagdev, the MLA from Chilika was an exception. He has started his mission of beating up and misbehaving with the officials from day one and he all along been allegedly getting protection from the ruling party. Jagdev has been arrested and jailed at least twice including for his recent act of mowing his car into the crowd at Banapur during panchayat elections leaving 23 people including eight police personnel injured. He was also beaten up by the public and hospitalized. Jagdev is now on bail.

Earlier in 2016, Jagdev had allegedly thrown a lantern targeting a woman tehsildar in Begunia area. He was also suspended from the ruling party after a video went viral showing him assaulting a dalit leader of BJP in Chilika area. In 2018 also an ex-Sarpanch of Begunia had lodged an FIR against Jagdev.

When the BJP has made it an issue, another such disturbing news came from Koraput district. The incident took place when Congress workers led by Jeypore MLA Taraprasad Bahinipati gheraoed the Papadahandi block office on corruption issue. There was a face-off between Bahinipati and BDO, Ranjita Mallick. “We are fed up with her work and conduct. She has threatened people to get them arrested on false cases of atrocities against women,” Bahinipati said, adding that she does not know how to behave with a public representative. Even after repeated complaints, the district administration has turned a deaf ear on this matter, Bahinipati alleged. However, the BDO refuted the allegations and said that Bahinipati has misbehaved with her instead.

In another incident, Union Minister Bisweswar Tudu was also accused of physically assaulting two officials in Mayurbhanj district. Mayurbhanj District Planning Board Assistant Director Debasish Mohapatra, who reportedly ended up with a broken arm, said he along with Deputy Director Aswini Mallick were called for a review meeting of MPLADs scheme at the minister’s room at Baripada town’s BJP office when Tudu suddenly flew into a rage and started beating them up with a plastic chair.

These are some of the instances of face-off between the peoples’ representatives and public servants. What has become a cause of concern is that there seems to be no end to such incidents and more and more lawmakers are allegedly taking law into their hands and getting arrested. The public servants on their part also seem to have failed to deal with the peoples’ representatives which many times led to such a situation.

It is another matter as to who is at fault. But the fact remains that Odisha has been getting a bad name out of the confrontation between the babus and netas. Both of them have specific roles to play for the development of the people in the state. If they keep fighting for whatever reason, the ultimate victim is development and the BJD government which is committed to build a New Odisha. Can Chief Minister’s dream of transforming Odisha be achieved when the netas and babus are at loggerheads?

The political and bureaucratic analysts conclude that the fight between the babus and netas is the outcome of clash of ego. While the netas think that the officials are their servants in many places, the babus are often not ready to agree to back up the stand of MLAs and MPs. When officials find that lawmakers are not respected by the senior officials in the state capital, they too see no urgency to honor the local leaders.

Though there is a Book Circular-47 for the officials on dealing with the peoples’ representatives, the provisions are not at all followed across the state which has led to such a situation. And this is high time that the government must rise to the occasion and deal with such situations firmly to restore the cordial relationship between the two arms of the development system, namely the people’s representatives and the public servants. The lawmakers also should respect the officials who are working day in and day out for the development in the nook and corner of the state. The opposition MLAs and MPs also have to change their mindset and stop seeing all the government servants as the agents of the ruling party. Even Union Minister Biswaswar Tudu is on the record saying that the Mayurbhanj district Collector is a BJD agent and not serving the people as an impartial administrator. This attitude must change and lawmakers should think several times before taking law into their hands. Ego clash is damaging the age-old system and more such confrontations are reported in the state. 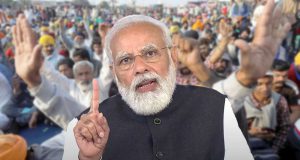 Braja Mishra - November 20, 2021 0
Bhubaneswar: All forms of Media across the country boomed with headlines announcing that Prime Minister Narendra Modi finally bowed down before the...