Bhubaneswar: THERE is a state-wide hue and cry over the neighboring Andhra Pradesh holding rural polls in some of the bordering villages of Koraput, Ganjam and Gajapati districts. The matter has already landed in the Supreme Court even before a high level dialogue over the dispute.

Odisha is expected to be in a better position as a strong man from Odia soil – Biswabhusan Harichandan is the Governor of Andhra Pradesh and Chief Minister Naveen Patnaik, has the distinction of being the Number One CM in many fields.

Both of them love Odisha, and now everyone expects that both the stalwarts will strive for an amicable settlement by pursuing dialogue. Apart from being an eminent attorney Mr.Harichandan was also Odisha’s Revenue Minister for a long time from March 2000 to May 2004.

The saffron veteran also knows all the aspects of the issue and his intervention will certainly help resolve the issue outside the court and bring peace between Andhra Pradesh and Odisha. The neighboring states are now at loggerheads and nobody knows what shape this situation will take in future.

This apart, BJP as the state’s principal opposition party too has a role to play. If Andhra Pradesh’s claim that it had held rural polls in Kotia area in 2006, was true, then BJP too should remain accountable for this. Senior BJP leader Manmohan Samal was Odisha’s Revenue Minister from May 2004 to December 2008 when the controversial polls were said to have been conducted.

The neighboring state has also claimed it held panchayat polls in 2013, a time when present BJD veteran Surjya Narayan Patro was Odisha’s Revenue Minister between May 2009 and May 2014. Presently, AP’s panchayat polls were held on 13 February, with BJD leader Sudam Marndi heading the Revenue Ministry.

Therefore, both the governing BJD and the opposition BJP have to account for the anomaly. Biswabhusan and Naveen have crucial roles to play and attempt in resolving the issue through dialogue instead of running to the Supreme Court.

The role of Naveen Babu is especially crucial as Andhra Chief Minister YS Jagan Mohan Reddy has always been respectful towards Naveen Patnaik like other Chief Ministers of India. Odisha should try to resolve the issue through dialogue instead of entering into a legal battle. Of the 30 districts of Odisha, 14 districts have common borders with other states.

Of the 14 districts, the state has border disputes in seven districts, mostly with two states: Andhra Pradesh and West Bengal. Odisha has borders with Jharkhand and Chhattisgarh also, but without such trouble with them.

The AP issue is aggravated because of the Reddy Government’s intervention. The Government of AP should refrain from making such noise and lure the inhabitants of the three villages in Odisha territory.

If the border tensions with foreign and often hostile nations could be defused peacefully, why not between Odisha and Andhra Pradesh? Naveen should take the lead and Mr.Harichandan should also put his efforts to ensure that peace must be maintained between his “Janma Bhoomi” and “Karma Bhoomi.”

Naveen, a peace-loving person, who has been demanding to include the word “Ahimsa” in the preamble of Indian Constitution as a mark of respect to Gandhiji, should now practically apply the ideology in this dispute and strive for peace between the two states. Andhra Pradesh should also be told to stop luring poor people living in border villages, maybe Koraput, Ganjam or Gajapati.

If AP stops luring the people, the ugly competition between two states at the ground level will automatically come down. All the bordering states should also pledge that no one will trespass on other’s areas and not harbor any antisocial, anti-national elements for any purpose.

The border disputes with AP and WB have its roots in mafia raj who have their eyes on the wealth of the other states. In a nutshell, it is mostly a handiwork of mafias and local criminals than the state governments. Meanwhile, the matter has enticed the opposition BJP and Congress to create brouhaha over it so as to put the BJD Government in the dock.

The matter has been in the Supreme Court and the Apex Court while hearing the matter on February 19 allowed four weeks’ time to Odisha for submitting more documents in order to nullify Andhra Pradesh’s claims. The neighboring state in its affidavit filed by Vizianagaram District Collector has submitted as many as 16 annexures to justify its claim that three villagesGanjaybadra, Pattuchennru and Pagluchennuru, lay in its territory.

Odisha rejected the claims of Andhra Pradesh, and must now prepare a detailed document for justifying the claim that Kotia belongs to Odisha and the above villages are under the territory of the State. While the matter is pending with the Supreme Court, an amicable and out of court resolution may be the most satisfactory outcome, which will depend on the efforts and statesmanship of the two stalwarts – Biswabhusan Harichandan and Naveen Patnaik.

But, nobody till now has thought about the exclusive Border Area Development Plan which is most important for a welfare state. The people having experience of living in border districts know how the petty criminals from other states cross borders and undertake crime in our states. The people have also seen how the people across the state border, which is just feet away from them, get all such amenities like health, education roads and others.

The citizens who live within Odisha feel neglected and many times they support the neighboring state because of the massive welfare activities being taken up by the neighboring government. So, there is a need for dialogue; and taking up massive development initiatives will not only sort out the nagging problem but also smoothen the unstable situation before it goes out of control in the border zones of the State. 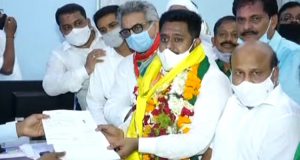