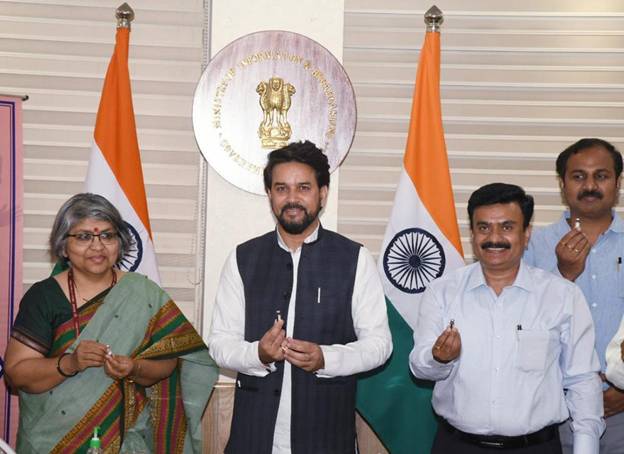 New Delhi: In a breakthrough achievement, the National Dope Testing Laboratory (NDTL) has indigenously developed six new and rare Reference Materials (RMs), which is the purest form of chemical required for anti-doping analysis in all WADA-accredited Laboratories across the world. The six RMs have been developed in less than a year by NDTL in association with the National Institute of Pharmaceutical Education and Research (NIPER)-Guwahati and the CSIR-Indian Institute of Integrative Medicine (IIIM), Jammu.

The RMs were launched by the Union Minister of Youth Affairs and Sports, Anurag Singh Thakur during the 15th Governing Body Meeting of NDTL, in the presence of Sports Secretary Sujata Chaturvedi and other senior officials of the Sports Ministry.

With the creation of these RMs NDTL has earned itself the recognition of being one of the few labs in the world where such RMs have been developed. Speaking about the achievement, Mr.Thakur said, “I applaud the scientists of the three institutions who have worked tirelessly to create these Reference Materials. These Reference Materials are not readily available across the world but are needed by every WADA-accredited laboratory for their anti-doping analysis. India itself has been importing RMs from Canada and Australia, however, with this scientific development India has indeed taken a step towards Atmanirbhar Bharat, which is the vision of Prime Minister Shri.Narendra Modi ji, in the field of anti-doping science. Very soon, we will also be exporting these RMs to other countries.”

Thakur further added, “The availability of these rare Reference Materials would help the entire anti-doping community to strengthen their testing capabilities and usher in an era of mutual co-operation among countries for promoting fair play in sports policy world over.”

The research for these Reference Materials started last year when NDTL signed a Memorandum of Understanding (MoU) with both the national scientific organizations in order to indigenously synthesise and develop 20 such Reference Materials of prohibited substances, in a phased manner, over a period of 2-3 years. These R&D activities between NDTL & NIPER-G and CSIR-IIIM, Jammu have been undertaken with the active support and funding of the Government of India.

The launch of these Reference Materials will ensure improved anti-doping testing which is in line with the Sports Ministry’s commitment towards promotion and effective implementation of anti-doping programmes in the country with the sole objective of fair play in sports.

Tathya Correspondent - September 1, 2021 0
Bhubaneswar: When entire India is talking about sports in the aftermarket of the Tokyo Olympics, youths practicing traditional sports Mallakhambh has been...