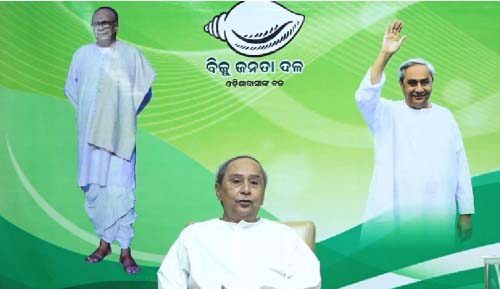 Mr.Patnaik’s visit to Mayurbhanj is considered politically significant as the opposition BJP has already made ‘Daughter of Odisha’ Shrimati Murmu’s election as the President a major issue.

The Saffron Party has activated its entire network to propagate that Prime Minister Narendra Modi has sent a tribal woman from Mayurbhanj district to Raisina Hills.

He also called upon party workers to ensure that the Tricolour and the photo reach one crore households in the state.

Sources say that PM Mr.Modi may visit Rairangpur sometime after the monsoon.

Chief Minister Mr.Patnaik on 10 August approved a proposal of Rungta Metals Private Limited (RMPL) for setting up an integrated steel plant at an investment of Rs 1400 crore in Rairangpur sub-division in Mayurbhanj, officials said.

People of Mineral Rich Mayurbhanj have been demanding a steel plant in Mayurbhanj district for a long time.

Now Chief Minister has fulfilled the demand with the HLCA Clearance for RMPL Steel Complex.

Chief Minister is scheduled to inaugurate two major irrigation projects which will benefit farmers of Mayurbhanj, Keonjhar and Balasore districts. He is likely to launch several other development projects too.

The BJD also attempted to gain mileage out of the Presidential elections by putting up posters, banners and hoardings showing Shrimati Murmu tying Rakhi on the hands of the CM. Mr.Patnaik also campaigned for her before the election and urged all MLAs to vote for the NDA candidate.

Mr.Patnaik’s visit to Mayurbhanj is also considered part of his party’s election strategy. Of the nine Assembly segments in Mayurbhanj, BJP in 2019 won six seats and also the Mayurbhanj Lok Sabha seat.

The BJP has won the Lok Sabha elections in 2019 in Mayurbhanj and Sundergarh. On the other hand, BJD emerged victorious in Keonjhar which is adjacent to Sundergarh. All three districts are tribal-dominated.

Though BJD has regained the ground as it won 56 of the 59 Zilla Parishad seats in Mayurbhanj district in the panchayat elections held in February this year, party sources said, Shrimati Murmu’s election as the President can tilt the balance again towards BJP.