In a video message, Mr.Patnaik said he was deeply pained by BJP leaders’ personal and disrespectful attacks on party candidate Barsha. So, he decided to stand by her as a father figure and personally campaign at Padampur.

“Some people are asking me that you have not campaigned during the panchayat election and past several Assembly by-polls. I want to say them that some BJP leaders have disrespected a woman, an educated young woman, who is in grief after losing father. It saddened me,” the Chief Minister said.

Such a personal attack on Barsha is not only a matter too sad for him but also all women of Odisha, he said.

“Losing and winning in politics, contesting elections are different things. But to disrespect a woman like this is very reprehensible,” the BJD President said.

“That’s why I decided to stand by Barsha Singh – like a father figure, like a brother and a friend,” Mr.Patnaik said.

The CM cautioned state BJP’s leaders to refrain from making such remarks against women on the pretext of politics, else people of Odisha will never support them.

Slamming a couple of Union Ministers for their statements during the bypoll campaign, Naveen said those were made to deceive the people of Odisha and Padampur.

“Some Union Ministers have tried to hoodwink the people of Padampur on issues like rural housing scheme, GST on kendu leaves, delay in release of crop insurance, MSP on paddy, and rail connectivity. This is extremely unfortunate. You are at the Center, we are in the State. Let’s work together for people and the betterment of Odisha,” Naveen said.

He assured the people of Padampur that all the promises made by him will be fulfilled. 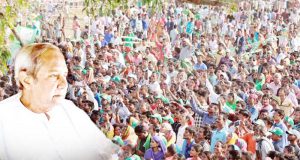 Himanshu - December 22, 2020 0
Bhubaneswar: The Governing BJD’s rank and file has reasons to be happy as party President and Chief Minister Naveen Patnaik has given...