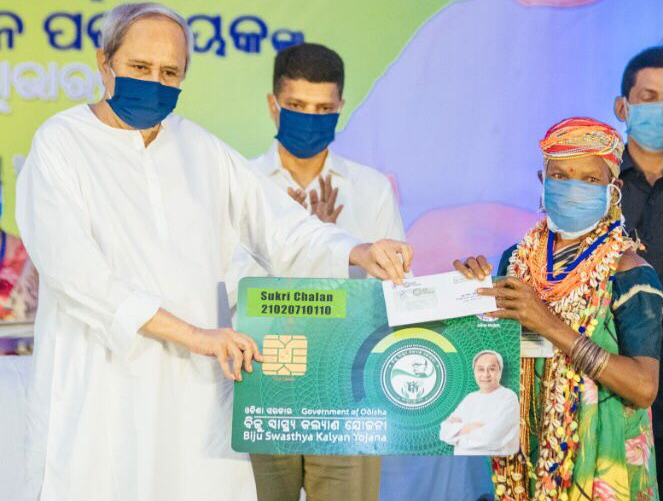 It’s a first of its kind service in the entire country. Malkangiri is the remotest place from State capital Bhubaneswar. Naveen launched the programme by distributing the first Smart Health Card to Sukri Dhangda Majhi from the Bonda community. The CM earlier had started his most effective one rupee rice scheme from the tribal district too.

Speaking on this occasion, Mr.Patnaik said, “For me, every life is precious. Whether it’s a farmer or a labourer, a small shopkeeper, or a rickshaw puller, a trolley roller, or a tribal brother or sister living in a remote area, or a common man, whether in the village or in the city, everyone’s life is precious to me.”

“I wish everyone to be healthy. Money should never be a barrier for treatment. Everyone should remain healthy and work for the betterment of their families. The State can only progress in the development of each family,” he said.

Informing about how the health insurance coverage for women under the Scheme has increased to Rs 10 lakh, the Chief Minister said, “In 2018, Ama Gaon Ama Bikash programme was going on for Malkangiri. I was attending the event from the Lok Seva Bhawan. At that meeting, a girl proposed to increase the cost of treatment for women under the BSKY. On that day, everyone praised the girl’s courage and intellectuality. The girl was Mamata Padiami of Malkangiri. I really liked her proposal and decided to enhance the amount.”

Today, the BSKY is being launched in a new way, which will come into effect on September 1, he said.

About 3.5 crore people of 96 lakh families will benefit from this move. In this type of no frills system, a person will simply go to a hospital only with the card and avail all the treatments without any hassle, Patnaik said.

Stating Odisha is the first State in the country to provide such cards, the chief minister said the beneficiaries can avail health services in more than 200 hospital chains of the country including Odisha.

It’s a historic, paradigm shift in the system of healthcare services in India, where a patient will get the best healthcare without any expense, he pointed out.

While families can avail treatment costs upto Rs 5 lakh per annum, for women members of the family, it is up to Rs 10 lakh.

Highlighting the relation of the economy with health, the Chief Minister said that health is important for all of us. “Health is wealth. So when someone in the family gets sick, our anxiety increases.”

The biggest concern is the money needed for treatment. For this, some sell land, some sell gold and some others borrow. Some even step in by sending their children to schools, he said.

“When I come across such news, it pains me. This Smart Health Card will alleviate your grief. It will help to ease your financial burden. The State Government is paying for your treatment. So you can save money and spend it for your child’s education, for the betterment of the family,” the CM said to the people of Malkangiri.

This smart card has 64kb chips. It contains all the information of the beneficiaries. Beneficiaries can go to Mo Seva Kendra and add new information if they wish.

Mamata Padiami, who proposed to increase the cost of medical treatment for women, shared her views. On the occasion, the Chief Minister flagged off awareness vehicles.