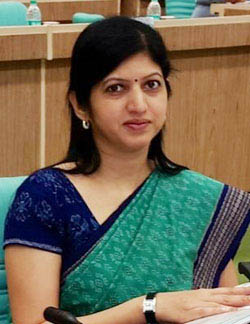 Bhubaneswar: Odisha will be greatly benefitted with the proposed Special Bidding under Regional Connectivity Scheme (RCS) Ude Desh Ka Aam Nagrik(UDAN) as several Routes in the State have been proposed for the bidding in UDAN 4.1.

Usha Padhee, Joint Secretary, Ministry of Civil Aviation(MoCA), who is executing and monitoring the most successful program RCS UDAN is happy over the progress.

On the commencement of the ‘Azadi Ka Amrit Mahotsav (India@75)’ launched by Government of India, the Ministry of Civil Aviation (MoCA) has proposed  about 392 routes under UDAN 4.1 bidding process.

The Regional Connectivity Scheme (RCS)- Ude Desh Ka Aam Nagrik (UDAN) is a flagship scheme of the Ministry of Civil Aviation (MoCA) envisaged to make air travel affordable and widespread in the country.

Till date, 325 routes and 56 airports including 5 heliports and 2 Water Aerodromes have been operationalized under the UDAN scheme.

The UDAN 4.1 round is focused on connecting smaller airports, along with special helicopter and seaplane routes.

In addition to these, some new routes have been proposed under the Sagaramala Seaplane Services in consultation with the Ministry of Ports, Shipping, and Waterways.

Usha Padhee, Joint Secretary, MoCA said, “Following the four successful rounds of bidding, the special UDAN 4.1 bidding round invites bids for priority routes which have not been covered under UDAN so far.

This bidding round also includes routes specially requested by the State Governments and Union Territories Administrations and earlier cancelled/terminated routes. We have observed great demand on many Tier-2 & Tier-3 UDAN routes attesting the necessity along with essentiality & criticality of these regional routes. We aim to equip our country with one of the strongest air connectivity networks”.

In case of Odisha, the State Government has requested for Bhubaneswar-Amarda Road and Bhubaneswar-Rangeilunda, officials say.

So both are being included in the UDAN 4.1 Bidding, said a senior official.

A senior official said “Some of the operational flexibilities are extended to Airlines under the UDAN 4.1 to ensure suitable operation models to connect smaller cities/ airstrips. Additionally, operations under NSOP will be allowed for seaplane, fixed-wing aircraft, Helicopters for RCS Routes awarded under UDAN 4.1”.

The Bid Document is uploaded on the Central Procurement portal of the National Informatics Centre inviting the bids from interested airlines.

The bidding process is expected to be completed by 6 weeks.

Tathya Correspondent - January 23, 2021 0
Bhubaneswar: The State Government has urged the Centre to establish the Eastern Industrial Corridor through Odisha. This will not...